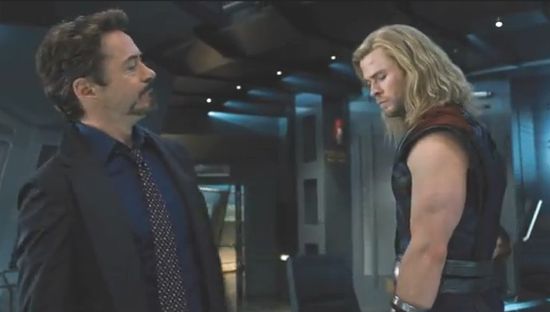 The second trailer for The Dark Knight Rises was officially released today, so it's only fair that we would get a new trailer for The Avengers as well. Especially considering that The Avengers is scheduled to arrive in movie theaters on May 4, 2012, while The Dark Knight Rises won't hit until July 20, 2012. Well, ask and you shall receive. A new Avengers movie trailer is making the rounds on the Internet today, and it reveals some brand new footage. There is a scene showing a discussion between Black Widow (Scarlett Johansson) and Bruce Banner (Mark Ruffalo), as well as Tony Stark (Robert Downey, Jr.) patting the arm muscle of Thor (Chris Hemsworth). There is only one little catch. The trailer is in German, and it was released for the German market. Hopefully, fans will get to see a new trailer for the U.S. market soon, as it's been far too long since the first trailer was released. You know a movie is going to be hot when fans are watching trailers where they can't even understand what the main characters are saying.  Of course, some would say the same thing about The Dark Knight Rises.