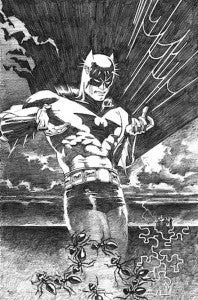 The next time that we saw a Batman movie trailer we kind of thought that it would be for Batman Vs. Superman. But DC Comics released a new  trailer today, which is designed to look like it's for a black & white motion picture. However, the trailer is actually for the second issue of Batman: Black and White, which is being written by Michael Uslan and drawn by Dave Bullock. Uslan is a producer on all the modern Batman movies to date, and his autobiography is entitled "The Boy Who Loved Batman." Batman: Black and White issue #2 with a story called "Silent Knight... Unholy Knight!" will be available digitally and in print on October 2nd, 2013.