Courtesy a Russian entertainment news website is a new image from Men in Black III, featuring Will Smith and Josh Brolin as Agents J and K respectively. Agent K is, of course, Tommy Lee Jones's role but in the third installment of the film franchise we see Brolin taking on the role of a younger version of the character through the magic of time travel. What do you think of the image below? How'd they do on the resemblance? 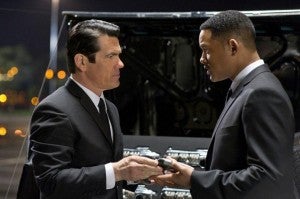