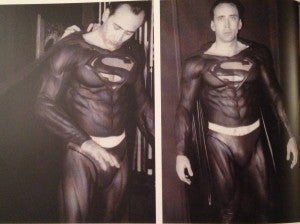 With Man of Steel coming and a Kickstarter underway to fund a documentary looking at the failure of the Kevin Smith-written, Tim Burton-directed Superman Lives, a project which would have loosely adapted The Death and Return of Superman with Nicolas Cage as the Man of Steel, it's not surprising that some documents and images pertaining to that film might start to surface. ...But this one's pretty interesting, and a bit hard to believe that it never popped up before. Here's a couple of photographs of Nicolas Cage dressed in what appears to be a repainted bodysuit from Burton's Batman films, in what The DCU Movie Page calls his "test suit" for the aborted Superman reboot. Certainly these photos look better than (and seem to put lie to) the silly, long-haired version of the photo that has been the standard image associated with the Cage-led Superman movie for years now. One or the other is likely to turn out to be Photoshopped. The film would have also starred Chris Rock as Jimmy Olsen and Cameron Diaz as Lois Lane. Rock later went on to work with the film's writer, Kevin Smith, on Dogma and Jay & Silent Bob Strike Back.