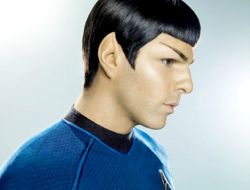 An open letter to Zachary Quinto: You don't know me, but I'm going to give you some helpful advice anyway. You see, I just got back from seeing the new Star Trek film, and I absolutely loved it. The story was great, the characters were interesting. It just rocked. Except one thing. You. While I did my best to pretend that the crazy hair, pointy ears and (even) bigger eyebrows really helped you to BE Spock, the problem is, I just kept seeing--and especially hearing--Sylar from Heroes. Sure, you got the Spock mannerisms down. And the head turns and stiffness of the character. But every time you spoke, I kept waiting for you to shape-shift or start doing that finger/forehead waggle you do on Heroes. Now I realize that there are a ton of folks out there that have never seen that television show, so they won't have a clue. But not me. I'm a hardcore Heroes fan, and I have to tell you that you're bordering on some Kevin Costner/Richard Gere acting here. You know, where they play the same character in everything they're in? So I'm asking you to take one for the team. I think you should punt yourself from Heroes. Why? Becuase you're about to have a movie with a $100 million opening weekend. That, my new friend, is your future. They're going to make more Star Trek films. Heck, I wouldn't be surprised if we see an announcement for a sequel come next week. It's time to do the right thing--for both your career and your fans. Get out of your Heroes contract. Just go away. How? I don't know. Ask them to kill off Sylar during sweeps. Fake a mercury poisoning attack (hey, it worked for Jeremy Piven). It doesn't matter how it happens. Just make it happen. I know,it'll be hard turning down that fat, weekly check. But you'll make up for it (and more) in the end. Trust me on this. I know what I'm talking about. Best of luck, A fan

Paging Zachary Quinto: It's Time To Let Go Of Sylar