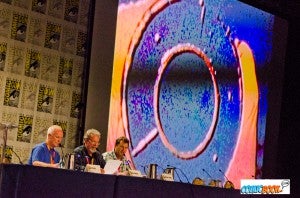 Cast members from Mystery Science Theater 3000 will present a live Rifftrax performance of "Manos" The Hands of Fate, one of the most popular MST3K episodes of all time, next month which will be broadcast live to theaters on the East Coast and tape-delayed that evening on the West. Fathom Events is presenting the one-night-only showing, and tickets are already available for presale. RiffTrax Live: "Manos" The Hands of Fate will play in select movie theaters on Thursday, August 16 at 8:00pm ET/ 7:00pm CT, and tape-delayed 7:00pm MT/ 8:00pm PT. Says the official press release:

We're getting all our Wives together, and ratcheting up the Torgo! Tickets are on sale to see the stars ofMystery Science Theater 3000 take on one of the worst films of all time:"Manos" The Hands of Fate - riffed live in theaters nationwide! Join Michael J. Nelson, Kevin Murphy and Bill Corbett of RiffTrax.com onThursday, August 16th for hilarious all-new riffing on a not-so-classic movie! This one night event will be your only chance to see the guys fire their wisecracking commentary at"Manos" The Hands of Fate on the big screen.

Nelson, Murphy and Corbett have been doing Rifftrax as downloads for years, but live performances of the MST3K-like commentary tracks have become popular events as well. They recently performed a live "Riff" of the Syfy original movie Birdemic at San Diego Comic-Con International earlier this month. Most fans remember Mystery Science Theater 3000 from its Comedy Central or Sci-Fi Channel runs, during which time it made its biggest impression on casual fans in the U.S. It ran from 1988-1999 on a variety of channels and, when it eventually wrapped up, former cast members have started up similar groups, one being Rifftrax and the other being Cinematic Titanic.