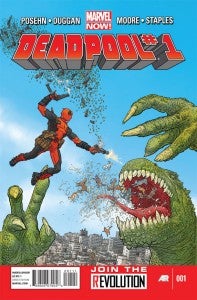 has ascended the throne vacated by Watchmen as the comic book movie longest in (rumored) development and that many fans feel is the least likely to ever see the light of day. Once in a while, though, news breaks on The Merc With the Mouth, and it's usually the character's creator, Rob Liefeld, who's doing the leaking. Today, a series of tweets seemed to indicate that Liefeld has reason to believe the movie is closer than ever to happening, and that a green light for the film might be imminent once the much-anticipated video game based on the character hits. Says Liefeld,

"I assure you, as Deadpool's daddy that me, Tim Miller and @mrmarkmillar have huddled on all things Deadpool. We will storm the castle!! "The single biggest blockade(blockhead?) is gone. Mr. Tom Rothman has been removed from Fox. Not a friend of Deadpool's. "I've said it again, if the Deadpool test footage was seen, leaked, the Internet would freak and riots would ensue. Bloody PERFECT. "I think the success of the Deadpool game will help immensely and get the Deadpool film a green light. It's going to be HUGE."

Both Liefeld--who is bringing Bloodstrike to the big screen--and Deadpool--the character's Marvel NOW! title is being written by comedian and actor Brian Posehn--have started to develop bigger Hollywood profiles this year, and of course Mark Millar (referenced by Liefeld above) recently took a job organizing 20th Century Fox's Marvel superhero movies and has expressed a desire to see them all interact with one another and, potentially, with the Marvel Studios films most recently represented by The Avengers.