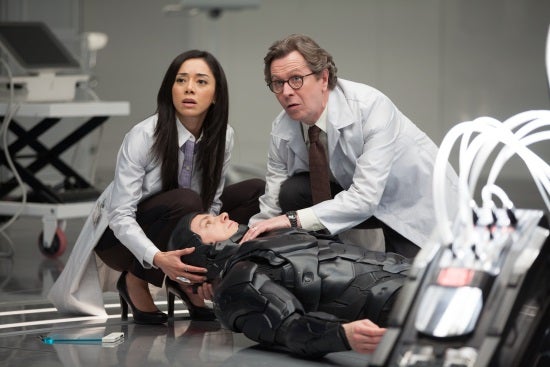 With the box office performance of Jose Padilha's RoboCop being watched carefully and scrutinized as to what it might mean for a number of similarly controversial remakes in the works right now, Mother Nature has thrown a fairly serious wrench into the works in the form of a massive winter storm that's discouraging potential moviegoers from leaving the house, and in some cases even causing theater closings, all over the East Coast. A strong CinemaScore rating and good reviews may help the film come the weekend, once the storm has let up somewhat in most of the country, but the New York market is expected to continue getting socked at least through Saturday and last night's Wednesday opening for the Sony/MGM action film delivered a disappointing $3 million. RoboCop is expected to take the #1 spot at the box office this weekend, but a storm-swamped opening weekend could hurt not just this weekend but the film's overall performance if it's perceived to have opened low. While the only major new releases are expected to open fairly low--fellow '80s remakes Endless Love and About Last Night, and the star-studded but poorly-reviewed Winter's Tale--RoboCop could still take a significant hit from the phenomenon that is The Lego Movie if it doesn't open strong. The Lego Movie continues to perform this week; it generated $2.1 million, more than 2/3 what the brand-new and much-hyped RoboCop did, as kids across the country had snow days and parents were apparently not averse to taking advantage. It's likely that the films will open 1-2, but Kevin Hart's recent success with Ride Along has some analysts wondering about the potential for his turn in About Last Night to drive that film to box office success.