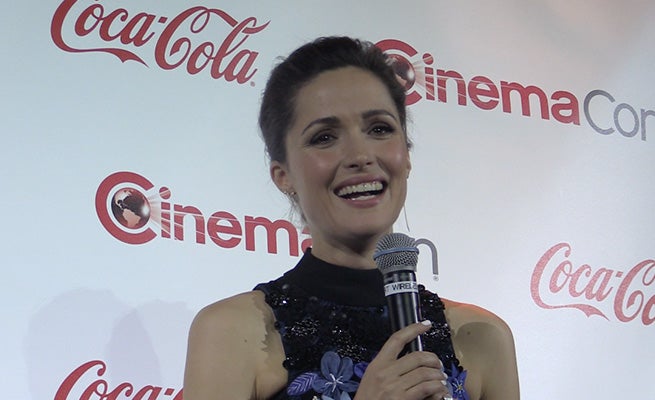 During 2015 CinemaCon, Comicbook.com got the opportunity to talk to Rose Byrne, who is appearing in Spy, which is set to be released on May 22, 2015. Byrne also briefly commented on two of her other upcoming films, Neighbors 2 and X-Men: Apocalypse.

ComicBook.com: In Spy, you're a nuclear arms dealer. Did you ever think that was something you'd be saying about yourself?

ComicBook.com: I bet that was a lot of fun. Great cast.

ComicBook.com: Yeah! What was going on there?

What wasn't going on there!

ComicBook.com: So, Spy is right around the corner. Looking to the future, Neighbors 2 is coming.

ComicBook.com: Are you going to return for the sequel?

Yes! Yes! That's the plan. Working with the boys again.

ComicBook.com: Of course, X-Men Apocalypse is coming, too.

Yes! Moira's back! Moira MacTaggert is back.

ComicBook.com: What can you tell me about X-Men: Apocalypse, if anything?

I can't tell you anything except that it's Apocalypse, so you know what they're dealing with. I don't know much myself yet but we start in the spring.

I mean, it's inevitable, right? They'll do some sort of universal, kind of, argument or fight or whatever!

How does it feel to be the CinemaCon Female of the Year?

I'm so flattered! Thrilled! I was very, very flattered. It's a great encouragement.

Did you call your family?

Did I call my family? I think I told them already. Yes. They were really excited.

Can you talk about working again with Paul Feig?

It was marvelous. He's such a beautiful artist to work with. He's such a collaborator and the biggest fan of women so I just treasure working with him. He's done so much to break the boundaries, and he's breaking all the conventions and I just adore him.

What do you like better, doing comedy or drama?

I think they're both so challenging in different ways. For me comedy is more challenging so that's something I'm going to explore. I've been so lucky to work with the likes of Kristen, and Niya, Russell Brand, and Seth. I've been very blessed just trying not to stuff it up too much.

ComicBook.com: Is it difficult to go from these grounded dramas or comedies to a movie like X-Men: Apocalypse and First Class which are so effects heavy?

It's good. Diversity is great. For any actor, it's such a pleasure to do something... I just did a very small film with Susan Sarandan and then to go do something like X-Men... I feel really privileged to be a part of such a huge film like that, especially with such a huge fan base that's so beloved, you know, with comics. It's great.

Following up on that question, how do you prepare for a big budget, effects heavy film differently than the other films?

I just avoid the craft service table at the bigger budget movies because they're deadly! It's really the same. It's so close in terms of how each actor works. It's the same process, just sometimes you have a little more time with bigger films whereas this one was just pushed for time. That's a huge part of the different experience doing it.

Working with Melissa McCarthy, how was the comedy with her? Did you have to buckle down a bit? I'm sure she can be crazy.

She's just brilliant, spontaneous, and unpredictable and so generous. I often would ruin her take from laughing sometimes. She's just so beloved and creates such an audience and just wants you to succeed. It's just such a pleasure to see her in this role.

You talked about ruining takes because you were laughing. How do you get yourself back under control?

I just punch myself! Or get someone else to do it. No... What do I do... I just pull it together. If she starts laughing, it's okay. I'm better than I was. With Bridesmaids, I was just dreadful. I was going to work and just laughing at jokes!