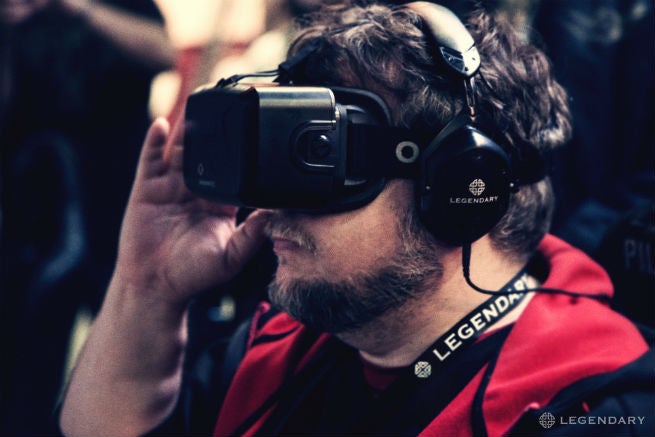 "It was important for me for people to have a firsthand experience both of this and Pacific Rim. They are sort of the left and right hemisphere of my brain," del Toro said from inside the Crimson Peak attraction.

"These are all aspects of me," he said of his films. "If you visit Bleak House for example, my home office, it is really...this. At the same time I have a kaiju section, I have a Manga cabinet. The thing is, as a storyteller, I say the constant is me, but I'm going to give you an appetizer, a main dish and dessert in my life if I can. I'm not going to serve you the same plate the whole time. So you can come and see Pacific Rim, you can come and see Crimson Peak and I'm crafting two completely different experiences in the movies."

The Hellboy and Pan's Laybrinth director explained that he's able to make a wide variety of genres and still have them feel like his movies, because each one is intensely personal.

"The important thing is I try to not make movies that I don't absolutely have to make becuase contrary to advice of Scarface, I get high on my own supply. And I get off as much in Gothic romance as I get off in robots versus monsters."

Asked whether there is anything he still wanted t get to, he said, "I'm very eager to do steampunk. You can see steampunk touches on Hellboy, you're going to see steampunk touches in Crimson Peak and even in Pacific Rim, I think the Russian robots and the Russian pilots are very sort of uber-steampunky. But that's a genre that I haven't been able to do and I'm dying to do one day.

Asked what is so appealing about comics that he crosses back and forth so often between comics and film, del Toro said that it goes back to his childhood.

"When I grew up there were three kings in my kingdom -- comics, TV and movies. What did I want to do? Comics, TV and movies," he said. "But what is funny is that five years ago I said in one of the press conferences that in five years I wanted to do animation, video games and TV. I'm missing the video game, because the company we were in business with went down, but I think that all I'm trying to do is trying to experience every narrative form and have fun. Look, I'm 49 and to this day I haven't been involved in any project that I wouldn't die for or get gangrene for, lose an eye, lose a limb, whatever. And comics and film they're the same to me. Equally important in what made me the person I am."

SDCC: Guillermo del Toro Talks the Importance of Comics and the Personal Nature of His Films