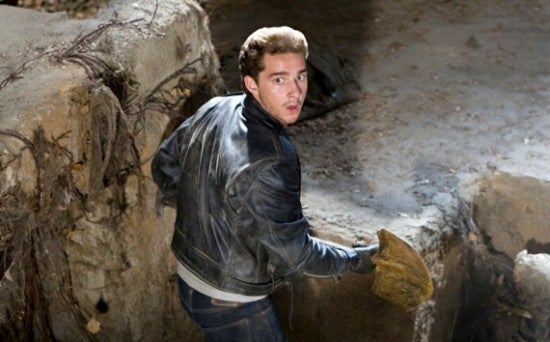 Since the last time we checked in with Shia LaBoeuf, his string of appropriated apologies has continued, about once a day, getting somewhat more contemporary and progressively closer to home. Arguably the most convoluted apology yet was aping BP CEO Tony Hayward--whose apology LaBeouf copied only after having copied the remark--"I'd like my life back"--that precipitated the need for an apology to begin with. But the oddness of that one is small potatoes next to LaBoeuf quoting himself in yesterday's apology. You can check out his latest batch of apologies, starting with December 20, along with annotations as to who originally said what:

I did not intend to hurt or offend anyone with my choice of words, but clearly I have - and for that I am deeply sorry. Words are important. — Shia LaBeouf (@thecampaignbook) December 20, 2013

This one comes from Alec Baldwin, who was suspended from his MSNBC talk show (ultimately, he and the network parted ways as a result) after hurling epithets, including homosexual slurs, at a paparazzi. This is particularly of note because the earliest instances of LaBeouf being publicly accused of plagiarism were when he tweeted a series of e-mail exchanges between himself, Baldwin and director Daniel Sullivan--and pieces of LaBeouf's end of the conversation were pulled verbatim from Esquire.

I lifted the text, probably in one of my drunken stupors, probably approximately about a year ago. — Shia LaBeouf (@thecampaignbook) December 21, 2013

This one is partially LaBeouf's own--"I lifted the text"--but the rest of it, most recognizably the "drunken stupor" part--comes from Toronto mayor Rob Ford. This one isn't, strictly speaking, an apology and that's the direction these quotes have generally headed here. That was more just a confession, with Ford having acknowledged that he probably used illegal drugs during a drunken stupor.

Sorry to my cast re:the massive disruption it's caused their lives. There's no one who wants this over more than I do. I'd like my life back — Shia LaBeouf (@thecampaignbook) December 22, 2013

I made a hurtful and thoughtless comment on Sunday when I said that "I wanted my life back." — Shia LaBeouf (@thecampaignbook) December 23, 2013

These two both quote from BP CEO Tony Hayward, who said after the catastrophic Gulf Oil Spill that he'd "like his life back," and then was forced by public pressure to apologize for it.

I didn't write it nor make it come alive, make it work, I couldn’t do it, That’s my fault. Simple. When you drop the ball you drop the ball. — Shia LaBeouf (@thecampaignbook) December 24, 2013

This one, weirdly, is an original Shia LaBeouf quote--but taken from 2010. The original quote, given to the Los Angeles Times regarding Indiana Jones and the Kingdom of the CrystalSkull, was "You can blame it on the writer and you can blame it on Steven [Spielberg]. But the actor's job is to make it come alive and make it work, and I couldn't do it....[Spielberg has] done so much great work that there's no need for him to feel vulnerable about one film. But when you drop the ball you drop the ball." It seems that this particular snake has eaten its tail almost completely at this point. Could that be the end of LaBeouf's "apologies?" And if so, what's next?