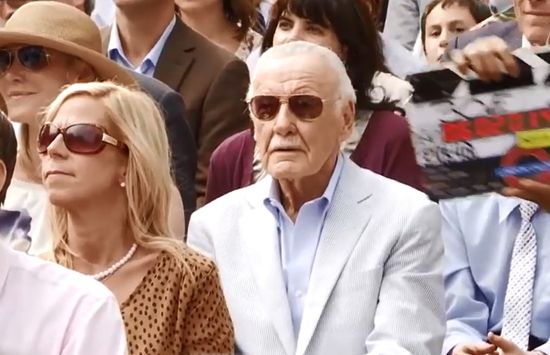 Love them or hate them, it's hard not to keep your eyes peeled for Stan Lee's cameo appearances in Marvel Comics films. The Spider-Man films, for whatever reason, often tend to have some of the most obvious, distracting Stan Lee cameos. Maybe it's the fact that he's so incredibly proud of his work co-creating Spider-Man...maybe it's just that Sony is somewhat more open to making the cameos a bit more flamboyant than are the folks at Marvel Studios and Fox. Lee's cameo in this week's The Amazing Spider-Man 2 was actually far less distracting, obvious and (frankly) silly than it was in the first Amazing Spider-Man. If you'll remember, the last time around he was working in the library when Spider-Man and The Lizard blasted through the place mid-fight.

That was one of the more painfully obvious Stan Lee cameos -- and while this one's wasn't exactly subtle, he didn't spend 15 seconds totally uncontested in the foreground, obscuring an action sequence. No, this time he was -- literally -- a face in the crowd, appearing at Peter and Gwen's graduation. When Spider-Man shows up, though, before he switches back to being Peter, you can't possibly miss ol Smilin' Stan, who says, "I think I know that guy!" There's been some speculation online (forgive me, but I cannot remember whether it was another article or just some chatter between fans on social media) that Stan may be playing himself in this -- and that the "I think I know that guy" is a wink-and-a-nod to the fact that, obviously, he knows Peter and Gwen. It seems more likely that the joke is a callback to the previous movie, and that perhaps he'd caught a glimpse of the chaos out of the corner of his eye or something as he exited the room where the melee was taking place. The Amazing Spider-Man 2 is in theaters now. Stan Lee will next be seen in Guardians of the Galaxy.