Before he was finally named, Benedict Cumberbatch's Star Trek Into Darkness villain was speculated to be any number of original series characters. Had that been the case, we would have had quite a bit of information going into the movie that, if not true, we could at least assume until we were told differently. Now that "John Harrison" is in the water, though, much less is known. Ahead of tonight's Super Bowl trailer for the film, what is it that we know, or at least have strong reason to suspect, about the formerly-anonymous villain? And what, if anything, will we find out tonight, either during the ad that runs during the Big Game or in the second quarter when the Star Trek Into Darkness app goes live with new content? Hey may be involved with Khan We'll start with the most tenuous one first, becuase it's the sexiest and it's the best thing we have to go on. John Harrison may actually be a J.J. Abrams reinterpretation of Harrison, the name given a recurring extra on the Enterprise during the Khan-centric episode "Space Seed." (He had appeared before that but never been named.) You can find out more about the character at the link above, but the gist is that he was a character who played a variety of roles in the series, but was eventually promoted to Lieutenant. He was a red shirt in "Space Seed" but survived the encounter with Khan. Lots of fans have taken this as a red flag that even if the character isn't Khan himself, Harrison might be Silver Surfer to another actor's Khan, coming out ahead of the bigger threat but still dangerous in his own right.  Is it a fairly baseless conspiracy theory? Absolutely--but it has that ring of "there's something to this" that fans always felt about the crackpot "the island is limbo" idea on Abrams's Lost. 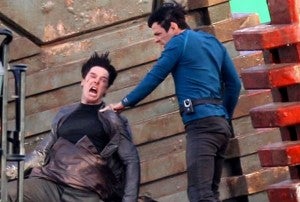 He's got a history with Kirk For one reason or another, this character feels he has a score to settle with Kirk. Whether it's someone that Kirk hurt during his wild days, someone who was overshadowed by Kirk's heroics in Star Trek or something else, it seems as though while Cain was trying to put forth a philosophy of some kind in the first film, this guy's terrorism is mostly just about punishing those he believes to have wronged him. He is, was, or wants to be a Starfleet officer. The uniform tells us this, of course, and the way he's been discussed makes it hard to tell whether he ACTUALLY was a member of Starfleet or whether he's using the outfit as a symbolic, psychological weapon. Answers on this (and the relationship with Kirk) might, of course, be answered in the Star Trek: Countdown to Darkness miniseries from IDW Publishing.

He's not afraid to get his hands dirty. Last time around, Cain spent most of his time in his ship, only really physically challenging his enemies when absolutely necessary. Harrison, though, is an entirely different story. We've seen him fighting Klingons, using apparently superhuman powers, leaping through windows, pointing a gun at Kirk and getting nerve-pinched by Spock. So, yeah. This isn't a guy who's hesitant about picking a fight. He's formidable physically and mentally. "[Abrams] described the role in movie terms as a mixture of Hannibal Lecter, Jack in The Shining and The Joker in Batman. There are sorts of levels to pitch in amongst quite a high bar as well to succeed in comparison to. It was a framework to understand this character before I saw the whole script," Cumberbatch said in an interview back in December. "He's someone who has extraordinary physical strength, he is someone who is incredibly dangerous as both a physical entity and as a user of various technologies and weapons. He performs acts of terrorism but he's also a psychological master. He manipulates the minds of those around him to do his bidding in a very, very subtle way. It was a wonderful game of mental chess." "Eric Bana did a great job [in Star Trek], but Nero was a much simpler, raving sort of furious dude," Abrams added in another interview. "The first movie was an origin story. The characters were all new to each other, so all they needed was a scary threat to face. It didn't need to be complex or nuanced. Just by default, given the number of characters and the structure of it, we could only go so deep. By necessity, it had to stop at a certain level. It had a ceiling. And now there is no ceiling."