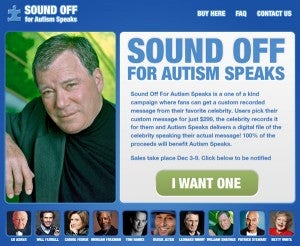 For a charitable donation of little under $300, fans can bid to have some of their favorite celebrities -- including Ed Asner, Carrie Fisher, William Shatner, Leonard Nimoy and Patrick Stewart -- record their outgoing voicemail message for them. For the week of December 3rd through the 9th, Sound Off for Autism Speaks will give fans the opportunity to vie for custom-created voicemail messages from a number of celebrities with recognizable, iconic voices, with all the proceeds going to autism research. According to a release from Autism Speaks, "A limited number of messages will be available from each celebrity on a first come, first served basis. Fans will have the unique opportunity to specify what they want their chosen celebrity to say in the message. Autism Speaks will send fans a digital file of their message within a few weeks of their order, once it has been recorded by their celebrity." "I got together with my son Matt (Autism Speaks' Executive Director for Southern California) and we talked about what my friends and I could do to support the important work of Autism Speaks," said Ed Asner, who is currently starring on Broadway in Grace. "We decided that bringing together a group of celebrities with great voices and doing a kind of 'voiceathon' would be a really fun idea that could help individuals with autism and their families." Asner has appeared in a number of animated comic book roles, as well as starring in Disney/Pixar's Up. Other celebrities involved include Will Ferrell, Morgan Freeman, Tom Hanks, Derek Jeter and Betty White.