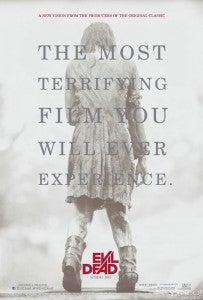 At the South by Southwest Festival, Sony has unveiled its new Evil Dead remake. Starring Jane Levy, Jessica Lucas, Lou Taylor Pucci, Elizabeth Blackmore and Shiloh Fernandez, the film is directed and co-written by Fede Alvarez, based on the original, cult-favorite series by Oz the Great and Powerful director Sam Raimi. "We already started writing Evil Dead 2," Alvarez revelaed the audience last night during a Q&A after the film. Original series star Bruce Campbell was there, and told fans that it's unlikely he'll appear in any of the new films, explaining, "I wasn't in this for a really good reason, and I probably won't be in the others for a really good reason: We wanted these to be completely separate. I hope one day you can go to a movie theater and watch the first three, and then the second three, and enjoy them all". We leave you with this magical piece of Evil Dead 2 wisdom, compliments of the film High Fidelity:

SXSW: Evil Dead Remake is Getting a Sequel, Being Written Now