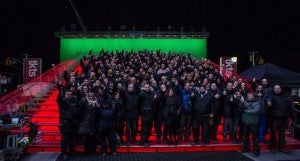 In the early hours of the morning (or late hours of the night, depending on your time zone) today, The Amazing Spider-Man 2 director Marc Webb tweeted out the picture at right, featuring the caption "Rest in peace, Roger." The image, showing what appears to be the assembled crew and some cast members (we see at least one guy who appears to be in a SWAT uniform or other sort of bulletproof vest) of the film gathered on bleachers (which, with a green screen behind, seem likely to be a setting for some scene or another from the film) and giving the "thumbs up" to the late film critic. Ebert and his original partner Gene Siskel, reviewers for competing newspapers who started a local TV show together, popularized the "thumbs up/thumbs down" method of reviewing movies. He gave a thumbs-up (in spirit; he waas no longer on TV at the time) to Webb's The Amazing Spider-Man, praising Webb's command of the film's effects and saying that it was second only to Spider-Man 2 in terms of the handful of films starring the character.