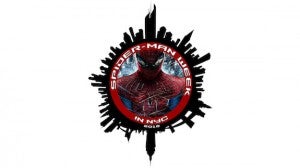 With less than two weeks to go before the web of Spider-Man descends on U.S. audiences (and less than a week before the movie starts to show up online because it hits the international market on Friday), Sony Pictures and the City of New York are working together to make it Spider-Man Week in the Big Apple. That's right--every day next week, Sony has put together a Spider-Man-themed event that will take place in New York and engage fans, involve the cast and help generate awareness and enthusiasm for the upcoming Spider-reboot, which will be in theaters all over New York and the U.S. on July 3. Beginning on Monday night, the week will be kicked off by dueling events at the Empire State Building, which will be illuminated red and blue, and at Forbidden Planet in the East Village (where this reporter used to work!). Other events will take place at the Natural History Museum, Madame Tussauds, On Location Tours, The Children's Museum and at the Sony Wonder Technology Lab. During the week, National Volunteer Day (June 26) will also happen, and in the spirit of "With great power comes great responsibility, members of the cast of The Amazing Spider-Man will join New York City's public servants in all five boroughs. "NYC Service is very excited to be partnering with Sony Pictures Entertainment and the cast of The Amazing Spider-Man in a national day of service that calls on all New Yorkers to volunteer and give back to their community," Diahann Billings-Burford, Chief Service Officer for NYC Service, said in a press release. "There will be projects occurring throughout all five boroughs, ranging from beautifying community gardens to CPR trainings. Join us, 'Be Amazing, Stand Up and Volunteer!'" It's a thoughtful promotion not only because all Marvel superheroes live and operate in New York but because the nature of his powers means that, more than any other character in comics, the New York skyline is built into the fabric of Spider-Man's stories. The fact that there's an entirely new skyscraper introduced in the film this time around nothwithstanding, Spider-Man's New York should be instantly recognizable to comics fans and New Yorkers alike.