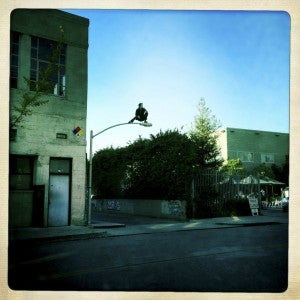 Well, it took a while but yeterday the Oscorp website finally yielded its surprises in the form of a video blog from Dr. Curt Connors, known to comic book fans as The Lizard and the villain of Sony's upcoming The Amazing Spider-Man. Among other things, we learn a little bit about Oscorp, confirming fans' supposition that Connors works there, and discover that he's looking for interns. Any bets the one he settles on will be a talented high schooler with a penchant for making his own web fluid? There's a second video on the site, as well, talking with Rhys Ifans about his role as Connors/The Lizard without the veil of the viral video site. It's an interesting approach, and one that's both entertaining and enlightening, to have the pair exist side-by-side. The videos were the culmination of a day-long scavenger hunt by fans of the film, who were given GPS coordinates via Twitter and uploaded what they found there, a series of Oscorp-themed items. One assumes that, sooner than later, we'll see similar spots for Gwen Stacy and Peter Parker, given that the studio just released a series of international character posters (pictured below, above the two videos). Thanks to Super Podcasto Magnifico! for the spot. [gallery link="file" order="DESC"]

The Amazing Spider-Man's Lizard Has a Vlog

Guardians of the Galaxy Vol. 3 Star Zoe Saldana Reveals Update to Gamora Straight From the Comics

Everything Leaving Netflix in February 2022