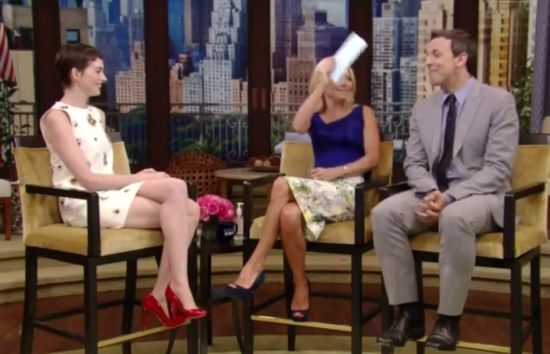 Anne Hathaway, who plays Catwoman in The Dark Knight Rises, appeared on Thursday morning's Live With Kelly. Co-host Seth Meyers was particularly excited about Hathaway's visit. Meyers said, "I'm a huge Batman fan. I'm just going to throw it out there. I like comic books and everything. But it's really exciting because you can't actually meet Catwoman in real life because she's fictional, so this is a really big deal for me." Evidently, Seth Meyers got to see an early screening of The Dark Knight Rises also. What did the Saturday Night Live comedian think? Meyers said, "I saw it, and you're amazing. You're the best Catwoman I've ever seen. It's really great. It's really awesome." Meyers added, "It's the greatest looking cat-suit I've ever seen." Of course, this led to a little discussion on the cat-suit itself. Hathaway revealed that while the accessories were made of leather that the suit itself was made of neoprene. Meyers said, "That looks like an outfit that you wouldn't be able to do a ton of moving in, but you do more movement in that than I do in like anything. You do things in the most constricting suit that I can't like do in pajamas." After a clip of a scene between Bruce Wayne and Selina Kyle, Seth Meyers offered up one more endorsement. Meyers said, "It was great. I love it. It's really exciting, and everybody should see it." The Dark Knight Rises is scheduled to be released in theaters on Friday, July 20, 2012.

The Dark Knight Rises Review: Seth Meyers, "Everybody Should See It"