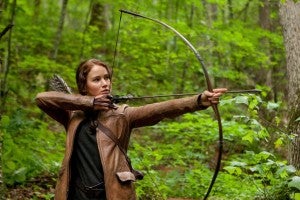 More and more box office analysts are expecting The Hunger Games to break records for the biggest March opening weekend in film history, after reports have started trickling in that last night's midnight and (hastily-added) 3 a.m. shows may have raked in as much as $30 million. Entertainment Weekly is reporting that the film scored $19.7 million at just the midnight screenings, setting a record for a non-sequel and the eighth-highest midnight opening in history. In order to break the March record, it would have to make more than Alice in Wonderland's $117 million. The film is on pace to have the biggest opening weekend in the history of its distributor, Lions Gate, whose previous record-holder was Fahrenheit 9/11, Michael Moore's blockbuster documentary which the studio took off the hands of a nervous Disney in 2004. Last night, ComicBook.com projected a record-breaking $139,755,000 opening for the film, and Box Office Mojo projected $135 million. That would be just short of The Twilight Saga: New Moon, the biggest opening of the franchise, which took home $142 million in its opening weekend. If it makes even $80 million this weekend, it will surpass ticket sales for the first Twilight film and therefore take the record for the largest-ever opening weekend for a non-sequel.