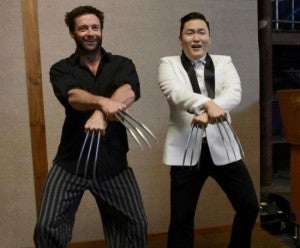 If you haven't seen The Wolverine yet, then be warned that spoilers follow. This article is intended for people who have seen The Wolverine and want to discuss it or who walked out before the scene aired and want to find out what they missed. The after the credits scene in The Wolverine is actually one of the best and longest credits scenes in a superhero movie so far. It runs for around two minutes. The after the credits scene actually takes place two years after the events of The Wolverine movie. Wolverine is shown walking into an airport. As he enters, he glances up at a TV monitor, which is playing a promotional message for Trask Industries. The tag line for the Trask Industries commercial is "With cutting edge technology and the world's leading lines, we're on the front lines, keeping you healthy, keeping you safe. Trask Industries, solving tomorrow's problems today." When Wolverine gets to the airport metal detector, he tells the agent, "I'll take the pat down." The agent turns around and tells someone off screen, "Opt out." Wolverine looks down at the airport basket where people put their metal objects before going through the metal detector, and all the metal coins and stuff have started shaking and floating up into the air. Then, Wolverine notices other metal near the detector is shaking and rising into the air as well. The metal detector itself starts going haywire, as the red light above it is flashing. The agent says, "You can go ahead sir," and Magneto's voice can be heard responding from behind Wolverine. Wolverine pops out his claws, before whirling around to come face-to-face with Magneto (Ian McKellen's version). Wolverine is struggling to use his claws on Magneto, but Magneto is using his power to freeze Wolverine's hand. Wolverine asks, "What do you want?" Magneto replies, "There are dark forces, Wolverine. Human forces building weapons that could bring about the end of our kind. I want your help." Wolverine snarls, "Why would I trust you?" Magneto answers, "You wouldn't." Magneto releases Wolverine's hand from his control. Wolverine looks around and notices that everyone in the airport is frozen. Then, a shocked Wolverine spies somebody else and begins to walk forward. It's Professor X (Patrick Stewart's version). Professor X wheels around all the frozen people in the airport, heading toward Wolverine. As he reaches Wolverine, Professor X says, "Hello Logan." A confused Wolverine stammers, "How is this possible?" Professor X responds, "As I told you a long time ago, you're not the only one with gifts." After staring at Professor X in almost disbelief, Wolverine glances back and forth between Magneto and Professor X." The screen goes to black.