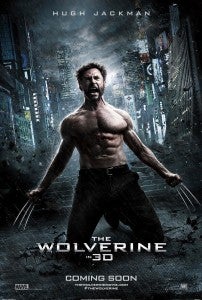 After a long wait for the first trailer to James Mangold's The Wolverine, it wasn't long before additional new footage has turned up in a CinemaCon trailer posted to the AMC Theatres page you YouTube. You can check out the video below which, like the previous trailers, is pretty light on the dialogue and exposition. Based on the celebrated comic book arc, this epic action-adventure takes Wolverine (Hugh Jackman) to modern day Japan. Out of his depth in an unknown world he will face a host of unexpected and deadly opponents in a life-or-death battle that will leave him forever changed. Vulnerable for the first time and pushed to his physical and emotional limits, he confronts not only lethal samurai steel but also his inner struggle against his own immortality. A version of that story--wherein he loses his healing factor and is "Killable," begins in July in the comics. The comic book story is rumored to end with Wolverine's death. In the movies, Wolverine will next appear in X-Men: Days of Future Past, the first Jackman-centric image from which debuted yesterday. Tomorrow, Jackman will host a live video Q&A with fans, taking questions on social media.