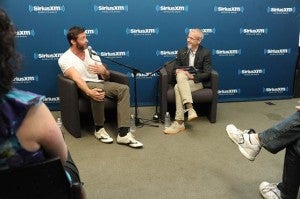 As part of the launch of Entertainment Weekly Radio and the Town Hall show, The Wolverine star Hugh Jackman joined a group of fans, moderated by EW's Jess Cagle, and answered some personal and professional questions. Sirius XM Radio have provided ComicBook.com with a sampling; you can check out the questions and answers below. One fan asked Jackman who would be there if he could host a dinner with anyone he wanted, living or dead. "Nelson Mandela would still be the top of my list," Jackman said. "I think the book A Long Walk to Freedom, to me, is one of the most inspiring books of all time and to me he is the living embodiment of Jean Valjean." He added that since he'd always been fascinated by history and philosophy, he'd also like Socrates to be there, "and just to spice it up, Ricky Gervais...because otherwise it would be way too earnest." Incidentally, it's Jean Valjean that was his hardest role--although he finds beefing up to play Wolverine the hardest diet he has to endure. Another fan asked him what power he would want from the X-Men library, leading to a very practical real-world answer from the actor. "Easy--I know which one, easy. Teleporting! Don't you think teleporting would be great? No more security at the airport," laughed Jackman. "And also, for an actor my job is I do have to travel and now with family all back in Australia, I could have just gone and had a swim at Bondi, come here for the Town Hall, picked up my kids in the afternoon? That'd be awesome--teleporting would be great." You can check out the clips from Soundcloud below.

The Wolverine's Jackman Reveals What Power He Wants and More

Saying Prey Should Have Been A Theatrical Release is Hindsight Fantasy