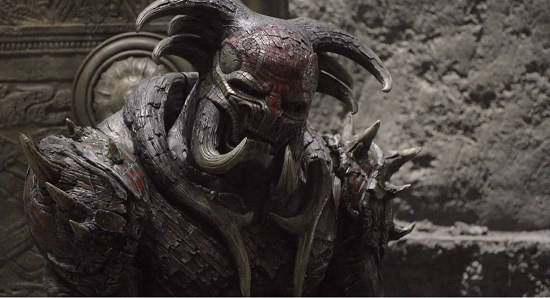 The Fresh Movie Trailers YouTube account (via CBM) have released two videos of Thor: The Dark World B-roll footage, apparently direct from Marvel considering their film quality...but it seems odd that the notoriously-secretive Marvel Studios would have allowed this material to get out there just yet, so don't be surprised if it's gone later in the day. Okay, so maybe that's overselling it. Most of what's spoiled here has been spoiled in the Comic Con footage already, but it's one thing to show it to a small group of rabid fans who are more or less a guaranteed ticket sale and another thing to show it to the whole Internet, and hope nobody blabs to everyone they know at the Halloween party. Check out the videos below, but again: Spoilers. Not game-changing, life-altering or even unexpected spoilers, really, but if you want to go into the movie cold and have your sense of suspense preserved, at least one of them is pretty major. And in case you don't want to watch it--that up there is Kurse, played by Lost and Bullet to the Head actor Adewale Akinnuoye-Agbaje, who spoke about the costume a while back and has given the Internet a lot of reasons to speculate as to just how it would look when we finally saw it. "The outfit weighed about 40 pounds. I'm sure there will be a certain amount of CGI but a good 80% was me in that suit," Akinnuoye-Agbaje said back in February. "The outfit informed how I was going to move – the horns – his fighting style as well. It's almost like he's made out of stone."