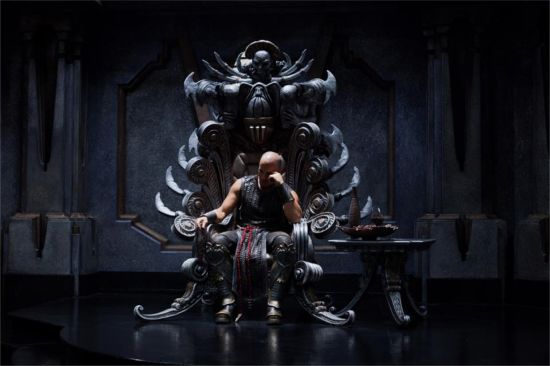 In a video posted on his Facebook page, Vin Diesel announced that Riddick is at the top of the charts in DVD sales and that Universal will be producing a sequel. That was only after a few minutes of Diesel doing his best Katy Perry impersonation. If you'd like to skip the overture, here's what he said:

Guys, I'm just...I'm excited, I'm happy, and I'm calling you guys or shouting out to you guys to say thank you. Universal just called me and told me that Riddick is number one on the DVD charts. There's no way Riddick would have been made without you guys, you know that. And you guys that have been part of our page since 2012 will remember how arduous a road it was for us to actually get the movie made and to make it rated R and to do it with such a low budget. It's a win for all of us and really, really, really thank you so much. I'm excited and of course Universal's also saying they want to develop the next one!

He followed all of that with some…interesting dance moves. Riddick is the third film in its franchise, now under Diesel's creative control. In it, Riddick (played by Diesel) finds himself left for dead on a barren planet crawling with alien predators. Activating an emergency beacon alerts two ships: one carrying a new breed of mercenary, the other captained by a man from Riddick's past. The film was met with mixed critical response, but generally was considered an improvement over The Chronicles of Riddick due to its "back to basics" approach. It was fairly successful at the box office, opening at #1 and grossing $42,025,135 domestically, and totaling $98,337,295 worldwide. Riddick is available now on Blu-ray and DVD.