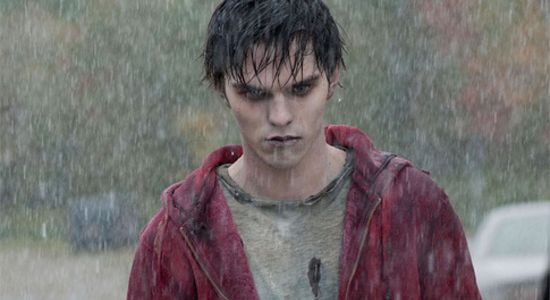 This was a week for zombie movie trailers. On the action movie side, the first trailer for World War Z was released. On the romantic comedy side, the first trailer for Warm Bodies was released. While comedy in a zombie movie can be difficult to pull off, Warm Bodies looks like it has real promise. It stars a young zombie named R (that's all he can remember of his name), who falls in love with a girl named Julie. Here are our five favorite scenes from the Warm Bodies trailer.

Why Can't I Connect With People

– Warm Bodies kicks off like a classic coming of age movie, but it suddenly takes an unusual turn. A moping young adult wonders "What am I doing with my life? I just want to connect. Why can't I connect with people? Oh, right it's because I'm dead."

– As Julie shoots at zombies, R spots her, and it's love at first sight. As he approaches her, she recoils in fear, but R gently caresses the side of her face, leaving a smear of blood.

– In order to protect Julie from other zombies, R tells her to pretend to be dead. Julie kicks into an over-the-top zombie impression, and R whispers, "It's too much."

– Julie bring R to meet her best friend. It's an awkwardly funny moment, as Julie's friend behaves just like any girl might upon meeting their best friend's new boyfriend, who happens to be zombie. She waves and says, "What's up?"

– In Warm Bodies, there are two types of zombies, the corpses and the skeletons (called Bonies). As the two engage in a fight, someone on a walkie talkie communicates "We're seeing corpses fighting skeletons, sir." This leaves the humans wondering who they should shoot. Warm Bodies is adapted from a novel by Isaac Marion. Warm Bodies is scheduled to open in theaters on February 1st, 2013.