Who knew movies about men in suits could be so different? 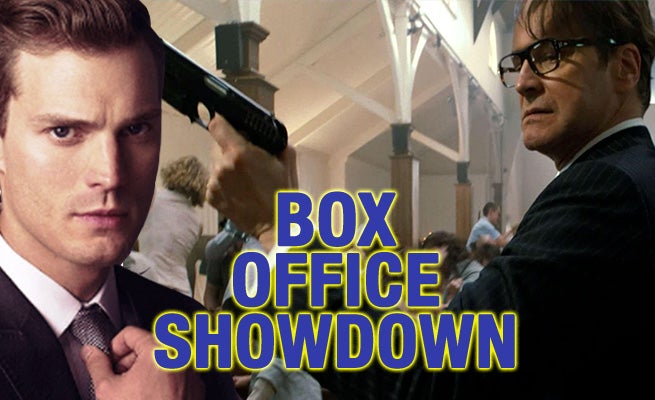 This weekend's box office will be fun to watch. In fact, it's one I'm particularly interested in. Two new movies hit theaters and while one is projected to do better than the other, they're both expected to do fairly well.

Fifty Shades of Grey, the movie adaptation of the world-wide phenomenon novel trilogy written by E.L. James, debuts as a romantic thrill over Valentine's Day weekend. Girls will go together and unfortunately for a few boyfriends, with guys, too. The movie has already claimed a spot among the top 5 movies for most ticket pre-sales and is expected to have an exceptional box office weekend.

Kingsman: The Secret Service couldn't be any more different from Fifty Shades if it tried. Kingsman is the a comic book adaptation of Mark Millar and Dave Gibbons' The Secret Service from 2012, with Kick-Ass' Matthew Vaughn at the helm. The film introduces the world to Taron Egerton, who plays a petty street criminal turned super spy by a man who isn't typically known for kicking butt in movies, Colin Firth.

Reviews have poured out for both Fifty Shades and Kingsman this week, and like the movies themselves, they are quite different. Through it's first 15 reviews Kingsman held a perfect score on Rotten Tomatoes and currently sits around 75% and Certified Fresh. Fifty Shades, on the other hand, is not winning over many critics. Despite the acclaim for the books, the movie is sitting at a lackluster 36% on Rotten Tomatoes.

There's no doubt Fifty Shades of Grey will pull an audience, probably one that doesn't typically go to the movies all that often, and make an incredible, undeserving lump sum of money. Kingsman: The Secret Service will perform nicely, but won't match up against the legions of women flocking to Mr. Grey's playroom.

While my hope is that Kingsman over performs as it deserves to, my prediction is more realistic:

Fifty Shades debuts with an insane amount of anticipation from an enormous fanbase. Folks who haven't read the books know at least the basic elements of their stories and what to expect from the film. The film substitutes star power with attempting to be a bold fantasy driven experience for its target audience- who will come out in droves to watch. The poor reviews will have little effect on those who decided to see this movie months ago.

Kingsman packs stars like Samuel L. Jackson and Colin Firth into fun and exciting roles and exploits that through it's marketing campaign. The satisfactory reviews will also help sway folks who are debating whether or not to cough up money to their local box office.

Who's going to be victorious at the box office this weekend and by how much?  Let us know your box office prediction in the comment section below.