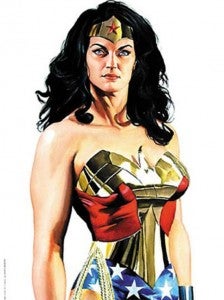 After watching a trailer for what looks to be a very good documentary called "Wonder Women! The Untold Story of American Superheroines," I started wondering why there's never been a live action Wonder Woman movie. I get it that Hollywood is only going to make movies that they think will make them money, and there is the perception that comic book movies primarily appeal to a male audience. However, I think Warner Bros. is missing the boat by not fast tracking a Wonder Woman movie. Sure, there have been rumors over the years that a Wonder Woman movie is in the works, but there have been no firm announcements of a script, cast, or director associated with the project. In the mean time, we've gotten multiple Batman and Superman movies and even a Green Lantern movie. Now, the Green Lantern movie didn't exactly pan out the way Warner Bros. hoped at the box office, so that could discourage them from taking a chance on any other characters beyond Batman and Superman. But I really think Warner Bros. might have been better off doing a Wonder Woman movie before a Green Lantern movie. While Green Lantern might be a better selling comic book, Wonder Woman is a much more recognizable character among the general public. With Wonder Woman, the potential goes well beyond just attracting comic book readers. During the seventies, Wonder Woman was the star of one of the most popular TV shows around. Many popular TV shows from the seventies like The Brady Bunch and Charlie's Angels have already been brought back as major motion pictures. People who grew up watching the Wonder Woman TV show would be attracted for nostalgic reasons.

Plus, the market is overdue for a big budget superheroine movie. Sure, there's no denying that the main clientele of comic book shops does seem to consist primarily of adult males, but there are female comic book fans. In fact, judging from the make-up of attendees at recent comic cons I have attended, the female comic book fan population appears to be growing. Warner Bros. would likely have all the male comic book readers hooked on a Wonder Woman movie at "hello." And as long as they treat the character seriously and respectfully, then they would also pull in an underserved female comic book audience. Think about it, the male superhero comic book movie space is only getting more crowded, so there's a real opportunity to target an expanded audience with a well-crafted superheroine movie. Most importantly, Warner Bros. should realize that Wonder Woman is a cultural icon, and her appeal goes far beyond just the current comic book reader market. A solid, well-scripted Wonder Woman movie has the potential to become the type of event movie that the original Superman movie was back in '78. Wonder Woman could become the next big movie franchise for Warner Bros. In the "Wonder Women! The Untold Story of American Superheroines" trailer, Lynda Carter says, "They did not think that a woman could carry a show. Well, we proved them wrong and made a lot of money for the network. A lot of money!" Here's hoping that someone at Warner Bros. realizes that they could make a lot of money with a Wonder Woman movie.

Why No Wonder Woman Movie?