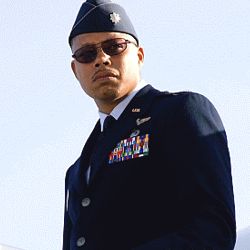 Can't wait until 2010 for a slew of heart-pounding Iron Man 2 battles? Well, wait no more Marvel fans, as a real-life battle of words is about to begin between War Machine and Iron Man. In an interview with Parade.com, actor Terrence Howard spoke out about Marvel's decision to replace him with Don Cheadle in the role of Jim Rhodes. "Marvel made a choice, and it was a very, very bad choice," Howard said. "They didn't keep their word. They didn't honor my contract."

According to Howard, Marvel Studios wasn't in a very sharing mood when it came to the film's $318 million gross ticket sales. For unspecified reasons, except for what Howard hints at as greed, the producers did not share profits with him, as well as several other members of the Iron Man cast, including actress Gwyneth Paltrow. According to Howard, the only actor who received a share was Robert Downey Jr., who played the title role. Howard called Downey out, saying "One of the things that actors need to learn to do is always stick together, one for all and all for one."

Currently, Downey has yet to issue a reply to Howard's remarks. But, when he does, fans can expect a heck of a response. The veteran actor has really taken on the responsibility of making the Iron Man sequel a success, settling disputes and answering to rumors about the film's possible controversial choice to focus on Tony Stark's battle with alcoholism. Early this year when Marvel and Mickey Rourke couldn't come to terms in salary negotiations for his role as Russian baddie The Crimson Dynamo, Downey took it upon himself to settle the matter, begging Rourke to take the role.

After his tirade against Downey, Howard then told Parade that he had seen the script for Iron Man 2 but that he wouldn't reveal any plot details for cosmic reasons. "I believe in karma," Howard said. "When someone does something wrong, you don't have to get them back. Everything right will return the favor for you." Howard finished the interview wishing his replacement, Don Cheadle, well, hoping the star does a better job than he in the role.