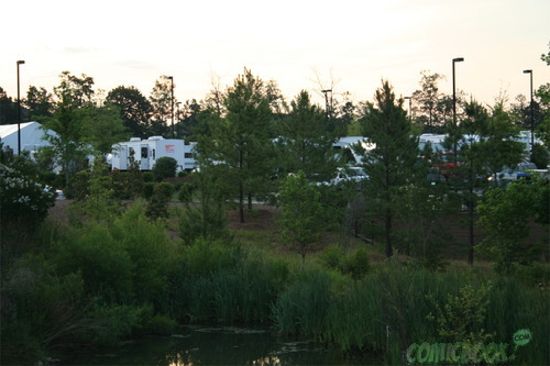 At Comicbook.com, we've been keeping you up to date on the latest Iron Man 3 news. After attending the Cape Fear Club shoot, we were the first to reveal that Iron Man 3 would be partially set in Miami, Florida. Today, Marvel Studios confirmed our report from last week by sending out a press release listing the filming locations, which include Wilmington, North Carolina, Raleigh/Durham, North Carolina, Miami, Florida and China. This morning, we were the first to reveal photos of the Iron Man 3 set-up at Epic Games in Cary, North Carolina. Security around the venue was tight, but one of the local news crews took to the air to get some shots from above. Most of what was visible from the ground was people doing landscaping, but the aerial shots revealed of all things…a Christmas tree. With most of the filming for Iron Man 3 to take place in the coastal town of Wilmington, North Carolina and the action being set in Miami, Florida, a Christmas theme seems like an unusual choice. There definitely won't be the need for a snow machine, so the Christmas setting would be decorations only.

Will Iron Man 3 Be A Christmas Story?