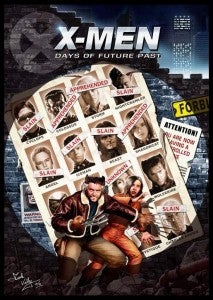 After having acknowledged a while back that he was in talks to join Bryan Singer's upcoming X-Men: First Class sequel X-Men: Days of Future Past, X-franchise anchor Hugh Jackman has been confirmed as appearing in the film. "I would officially like to welcome @RealHughJackman to the cast of #Xmen Days of Future Past," tweeted Singer. "Very excited! More to come..." That more to come? Likely more of the original cast of X-Men and X2: X-Men United, reprising their roles in the new film. While James Marsden may be somewhat difficult to swing since he's in talks for Guardians of the Galaxy, Sir Ian McKellen and Sir Patrick Stewart are returning and rumor has it that at least Famke Janssen is committed but as-yet-unannounced. Given the time-traveling, dimension-hopping nature of the comic book source material, the return of a dead character like Janssen's Jean Grey would be a fairly simple matter.  X-Men: Days of Future Past will be in theaters on July 18, 2014.

X-Men: Days of Future Past - Hugh Jackman Is In