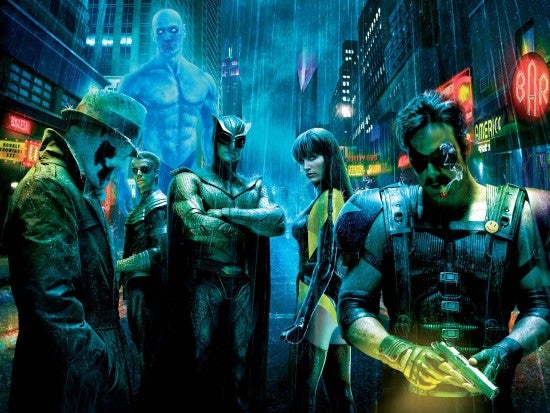 In a new interview with The Huffington Post promoting Warner Bros.' 300: Rise of an Empire, Man of Steel director Zack Snyder responded to producer Joel Silver's recent comments that his Terry Gilliam-directed Watchmen idea would have been a superior film to the one Snyder eventually made. While Silver criticized Snyder for being too slavish to Alan Moore and Dave Gibbons's comic book series, Snyder noted in the interview that one of the more persistent criticisms of his film is that he dramatically altered the bizarre ending -- one that numerous filmmakers and producers over the years had declared "unfilmable." Gilliam's version would have altered it even further, using a time-travel storytelling device to retroactively turn the entire film into a fictional construct and the heroes of the movie into comic book characters. "What [writer Charles McKeown] did was he told the story as-is, but instead of the whole notion of the intergalactic thing which was too hard and too silly, what he did was he maintained that the existence of Doctor Manhattan had changed the whole balance of the world economy, the world political structure. He felt that THAT character really altered the way reality had been," Silver explained. "He had the Ozymandias character convince, essentially, the Doctor Manhattan character to go back and stop himself from being created, so there never would be a Doctor Manhattan character. He was the only character with real supernatural powers, he went back and prevented himself from being turned into Doctor Manhattan, and in the vortex that was created after that occurred these characters from Watchmen only became characters in a comic book.…So the three characters, I think it was Rorschach and Nite Owl and Silk Spectre, they're all of the sudden in Times Square and there's a kid reading a comic book.. and he's like, 'Hey, you're just like in my comic book.' It was very smart, it was very articulate, and it really gave a very satisfying resolution to the story, but it just didn't happen. Lost to time." 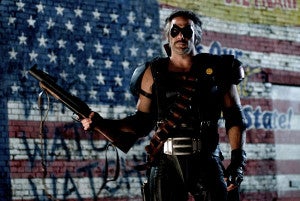 "It's funny, because the biggest knock against the movie is that we finally changed the ending, right?" Snyder laughed in his interview. "Right, and if you read the Gilliam ending, it's completely insane." His wife and co-producer Deborah Snyder added, "The fans would have been thinking that they were smoking crack." Snyder piled on, "Yeah, the fans would have stormed the castle on that one. So, honestly, I made "Watchmen" for myself. It's probably my favorite movie that I've made. And I love the graphic novel and I really love everything about the movie. I love the style. I just love the movie and it was a labor of love. And I made it because I knew that the studio would have made the movie anyway and they would have made it crazy. So, finally I made it to save it from the Terry Gilliams of this world." When the reporter rephrased the time-travel ending of the Gilliam version, Snyder conceded that it was utilizing elements that were present in the source material--but added that he'd done the same thing without resorting to a massive thematic change to the book. "It's just using elements that are in the comic book already, that's the only thing I did. I would not have grabbed something from out of the air and said, 'Oh, here's a cool ending' just because it's cool," Snyder said. "And that's the problem with genre. That's the problem with comic book movies and genre. And I believe that we've evolved -- I believe that the audiences have evolved. I feel like Watchmen came out at sort of the height of the snarky Internet fanboy -- like, when he had his biggest strength. And I think if that movie came out now -- and this is just my opinion -- because now that we've had Avengers and comic book culture is well established, I think people would realize that the movie is a satire. You know, the whole movie is a satire. It's a genre-busting movie. The graphic novel was written to analyze the graphic novel -- and comic books and the Cold War and politics and the place that comic books play in the mythology of pop culture. I guess that's what I'm getting at with the end of Watchmen -- in the end, the most important thing with the end was that it tells the story of the graphic novel. The morality tale of the graphic novel is still told exactly as it was told in the graphic novel -- I used slightly different devices. The Gilliam version, if you look at it, it has nothing to do with the idea that is the end of the graphic novel. And that's the thing that I would go, 'Well, then don't do it.' It doesn't make any sense."