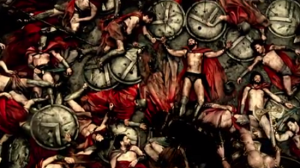 Warner Bros. U.K. have released a new, international trailer for 300: Rise of an Empire. You can check it out below.

Based on Frank Miller's as-yet-unpublished graphic novel Xerxes, the film is likely to be one of 2014's most controversial, giving more screen time to the Persian "god-king" whose depiction in 300 was the cause for a lot of controversy (for the uninitiated, Frank Miller's depiction of Middle Easterners is not typically considered a "balanced" one).

It's also being directed not by 300 director Zack Snyder (who had to exit the project to make Man of Steel), but "in the style of" Snyder by Smart People director Noam Murro. Murro hasn't really done a blockbuster yet, although he could have had A Good Day to Die Hard if it hadn't conflicted with 300: Rise of an Empire.

The film will open in March in both 2D and 3D, and stars Sullivan Stapleton, Eva Green, Lena Headey, Hans Matheson, David Wenham and Rodrigo Santoro.