The episode kicks off with a monlogue by Simmons on the history of Asgard's interaction with humanity--told regally in her English accent and ending with the fact that the Asgardians have left us with a huge mess to clean up.

Cut to London, where Ward is overseeing Fitz (who makes a reference to "this it eh kind of work a monkey could do") cleaning up after the events of Thor: The Dark World, looking over what's left over for alien stone. Simmons is avoiding calls from her parents.

In another room, Coulson and Skye are talking about (again) the misconception of the Asgardian "aliens" as Norse gods; she wishes they'd left their ship behind, an idea that seems to intrigue Melinda May, but Coulson can't remember when alien stuff in human hands ever ended well. Skye and May both agree they'd like a piece of Thor.

Ward, Fitz and Simmons find a small piece of Malekith's ship, which Ward stores away "out of sight, out of mind" in a biohazard container.

At a park, two rangers come upon a sign that's been defaced with a symbol; in the woods nearby, a pair of hikers are walking around and find a group of large stones surrounding a tree. They read from a book and then cut the tree down with a chainsaw. The sound attracts the attention of the rangers--but not until the couple find a metal staff buried inside the tree. They're excited by it--the man presents it to the woman, who grabs it and starts to seize; he tells her not to fight the rage already inside of her, to embrace its power. When the rangers show up, she bats one of them away and through the tree line with one hand.

The S.H.I.E.L.D. team has made their way to the scene, then, and Simmons is trying to overcome her fear of falling from a height to climb about 15' up the downed tree. Ward talks her through it by asking her a bunch of scientific question.

Coulson is talking to the remaining ranger, who's ashamed that he ran while his friend was dying.

Simmons figures out that whatever was in the tree was Asgardian by looking at her computer and conferring with Fitz; she scans the imprint left in the wood and Simmons tells her that it's a staff or a rod. 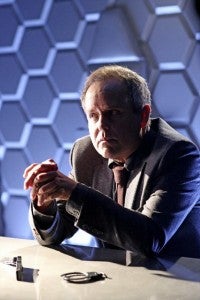 Skye calls over to Coulson on the comms that the pair are leading a riot in Oslo. They've left a message in fire on the street: "We are gods."

Back at the Bus, Skye has figured out who the pair are and that they're part of a group of Asgardian cult. There are two other pieces of the staff, and S.H.I.E.L.D. has to find them before the cultists do. Coulson tells them that they're going to go to a Norse mythological scholar for answers.

They arrive with to Professor Elliott Randolph's office, where he tells them that they're looking at a piece of the Beserker Staff, the weapon of a powerful Asgardians soldier who broke it into three pieces and hid them around the world while he lived on Earth rather than returning home.

Randolph points them at a treasure trove of Norse relics. Skye has found that there's a lot of chatter about going underground among the cultists. One of the spots, in the same city they're already in, seems to fit the description of the second part of the staff. Ward and Skye are looking for something--and finds Randolph, who blasts him with a piece of the relic. Ward collapses, panicking, and can't tell them clearly who has it. Randolph bumps into the pair of hikers as he works his way to his car and they follow him there.

Coulson chases down the sight of cars being thrown around, arriving at Randolph's side, who tells Coulson he screwed up.

Back at the Bus, the techs are checking out Ward while Coulson interrogates Randolph, who says he just wanted to be the first to study the staff.

Ward is getting more and more agitated, while Skye tries to get him to talk to her. He gets abusive toward the group.

Coulson is talking to Randolph, telling him that this case is personal to him because of his experience with the Asgardians in the past. He leaves him there when Randolph doesn't know anything more. 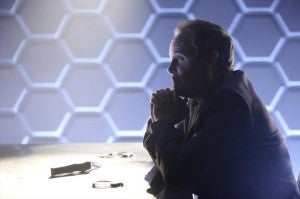 Working out, Ward keeps flashing back to being dropped in a well as a child. He's pounding the crap out of a bag, when May comes to offer him help.

In the underground, the cultists are leading a rally of angry people, screaming about becoming gods. They start building an army by letting their members grab onto the relics and be infused by some of its power.

On the Bus, Ward tells Coulson that he's concerned that his exposure to the weapon has compromised him. he admits that there are memories he has repressed, and that touching the staff unlocked it. He tells Coulson he doesn't trust himself. Coulson tells him that the fact that he's so open about it means he can be trusted. He doesn't trust Randolph, though, and maybe it's time for him to let some of his rage out in the room.

Randolph tells Ward that he doesn't know anything else--but Ward doesn't believe him and swings a knife at him. Randolph stops the blade, mangling it with his bare hands. He's Asgardian.

He peels his handcuffs off and asks how Coulson knew who he was; Coulson explains it (not very interesting; won't recap). Randolph is the Beserker, of course.  May locks the room down. Randolph tells them that he told his story to get laid.  He explains that he had been a mason, but wanted to get out of Asgard. He signed up as a soldier and then got rid of it and its power. They tell him if he doesn't help them find the last piece of the staff, they'll turn him in to Thor and send him back to Asgardian prison.

He tells them to go to a monstery in Ireland. They bring him with them when they arrive and Ward asks him about the effects of the staff; he says it will wear off in a few decades.

In the monastery, the cultists have beat them there. They creep out around a corner and stab the third part of the staff into Randolph's chest, saying that to be a god, you must defeat one. Ward jumps them, grabbing the staff, stabbing Randolph with it again and soaking in a bunch of its power, then tackling the bad guy.

A batch of powered-up cultists come in and go after Ward, who keeps loading up on staff power and takes a bunch of them out while flashing back to his well memory. It's not him at the bottom of the well, though; Ward is the one at the top of the well, feeding rope down to the drowning kid, in spite of his brother's threats to throw him in if he does. By the time that's all revealed, Ward has taken out all the cultists and drops the pieces of staff on the ground. He's nearly wiped out when the female hiker shows up, seeing all of her friends dead. She takes a piece of staff and powers up while May powers up on teh other two; the pair battle briefly, and May fits the whole staff back together, easily defeating the woman and then putting it back down.

Back at the rectory, Simmons finally takes her father's call, telling him it's been a rough few weeks.

May tells Ward that the reason she was able to keep her cool when she was handling the relics is that she doesn't repress her rage; she sees it every day.

Coulson tells Randolph about his death, and the missing time after. He isn't haunted by the lost time, exactly, so what's the problem? Randolph is going to relocate to Portland to keep his anonymity, worried about Europe's fascination with Asgard.

At a bar, Skye approaches Ward to see how he's doing; he's not great. He tells her about the memories he saw while under the influence of the staff. He goes back to his room alone, sees May in the hallway doing the same. He follows her in to kill a bottle of alcohol together, setting up the show's first love triangle.

In the post-credit sequence, Coulson is in Tahiti; he asks a woman massaging him if he fell asleep; he says he feels relaxed, that Tahiti is too good to be true. She tells him she knows; it's a magical place. He wakes up in a panic in his room on board the Bus.

Agents of S.H.I.E.L.D. Recap With Spoilers: The Well

Adam Sandler Finally Returns To IHOP After Being Turned Away