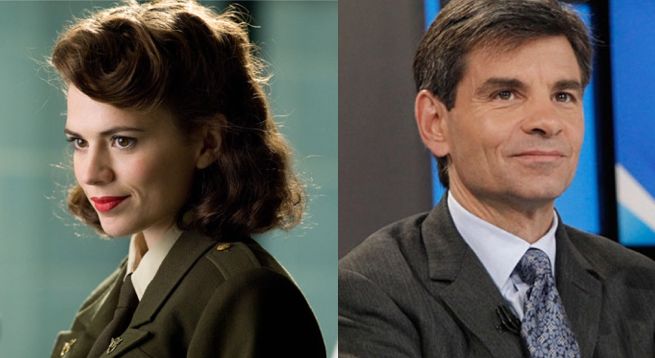 Marvel.com has release the official synopsis and credits for the Season 2 premiere of Agents of S.H.I.E.L.D. The Season 2 premiere is called “Shadows,” and it features some rather interesting guest stars. Among the credited cast is Hayley Atwell as Peggy Carter, who appeared in the Captain America movies and will soon star in her own Agent Carter series. Also, Good Morning America's George Stephanopoulos is listed as playing himself in the episode.

In "Shadows," Coulson and his team are now wanted fugitives with limited resources--but that's not stopping them from keeping the world safe from powerful and unseen threats everywhere. However, with new members they hardly know, will S.H.I.E.L.D. ever be trusted again?”

The "Shadows" episode was written by Jed Whedon & Maurissa Tancharon and directed by Vincent Misiano. Agents of S.H.I.E.L.D. Season 2 premieres on Tuesday, September 23, 2014 at 9 PM ET on ABC.