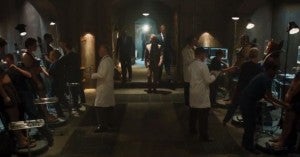 KSite TV has a new interview

up with Marvel's Agents of S.H.I.E.L.D. executive producer Jeffrey Bell, in which he discusses a range of issues from the show's (unintentional) homage to the character of Slapstick to writing for a large, quippy and Whedonesque cast. Along the way, he addresses the issue of the Extremis virus. Extremis, which is a key component of Iron Man 3, appears in the Agents of S.H.I.E.L.D. pilot. According to Bell, they didn't plan it that way; it just kind of came up in the writing process. "We realized that there was a link between what was happening to our character Mike [J. August Richards] and what was happening in the Iron Man movie," Bell said. "This is an example of 'wouldn't it be cool if this guy had this, and this happened, and then an explosion,' and then we go 'what if Extremis was part of that?' We talked with the movie guys, so they didn't feel like we were just ripping off their idea...we worked with Marvel Features on that." The degree to which the show will be working with the movie people remains to be seen; they're designed to fit into one coherent universe, sure, but the closer Thor: The Dark World is to release the more cagey producers are about the extent to which the events of that film will have a direct impact on Agents of S.H.I.E.L.D. They've gone so far as to say that the events will be acknowledged--the series, after all, will be just around midseason when Thor hits theaters and it's not as though Coulson is a stranger to the thunder god--but beyond that they're leaving it up to the imagination; even in the KSite interview, Bell notes that any decisions about actually including movie characters is above his pay grade. Check out the link above for a bunch more. Marvel's Agents of S.H.I.E.L.D. debuts on Tuesday.

Agents of S.H.I.E.L.D. Worked With the Movies to Include Extremis