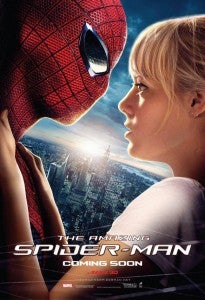 The producers of The Amazing Spider-Man are learning from the example set by The Avengers and releasing an absolute boatload of footage and imagery before the film's July 3 release.

In the case of The Avengers, the movie was so good that the attitude seemed to be that the studio had "nothing to hide" and that just because fans had seen parts of the movie ahead of time didn't mean they wouldn't pay to see the rest. It paid off big time for Marvel Studios and their parent company Disney, and now every day this week we've had at least a clip from The Amazing Spider-Man, showing us more of the film and pulling back the curtain a little more.

Today, there's a lot of information. Leading it off the new poster, shown at right, which is the first one so far to feature Gwen Stacy (who has been marketed as a major part of the film) on it. The composition of the shot and the look on her face looks quite a bit like the "I'm going to throw you out the window now" moment that's shown up in a couple of trailers, although that could just be me. That burst of light off in the background is likely centered around Oscorp, and one has to wonder--after all of the shots of Stark Tower in The Avengers' posters turned out to be foreshadowing the Very Important Role the building played in the movie's plot, what might be happening to cause that.

The Comics-X-Aminer is reporting that insiders say an after-credits scene in The Amazing Spider-Man will be used to set up for a sequel, a la the post-credits S.H.I.E.L.D. teasers used to bind together the Marvel Universe movies before The Avengers. Even money it has to do with Venom, whose movie is being developed now and who will reportedly tie into Spider-Man's films  in some way. 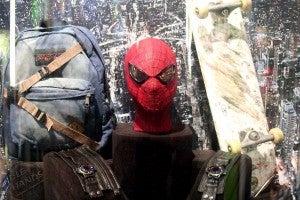 They've also got images borrowed from Idle Hands, giving fans an up-close-and-personal look at Peter Parker's mask, skateboard, backpack and something that appears to be either a webshooter or (more likely, to my eyes) a wrist-mounted GPS tracking device, likely an update of the old "spider-trackers." The gear is on display at TRU in Times Square, for anyone in Manhattan who wants to go see it. If you do, send us some more photos and we'll run them in our next Spidey update!

The last item of the day is a new scene from the movie, wherein Gwen begs Peter not to go after The Lizard on the grounds that she's already got a father who heads out and risks his life every day, and doesn't need a boyfriend doing it, too. He tells her that, he has to do it--that it's his fault for creating The Lizard in the first place. That is, of course, a sequence we've seen bits of in the trailers but none of the emotion--Gwen's in tears--and nothing that conveyed the same sense of urgency for the moment that you get in context. Check it out below and let us know what you think!