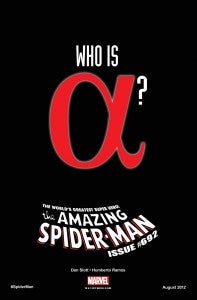 In recognition of the fiftieth anniversary of the title character, Marvel is teasing an event for The Amazing Spider-Man #692, due in stores this August. Asking, "Who is Alpha?" and featuring a logo that's a stylized version of the greek letter alpha. The publisher is billing the story as "the special anniversary issue you've been waiting 50 years for!" and suggesting that Alpha is a new character that will have everyone talking later this summer. From regular Amazing Spider-Man writer Dan Slott and artist Humberto Ramos, who most recently worked on the debut arc of Avenging Spider-Man, the story will hit the stands in August.