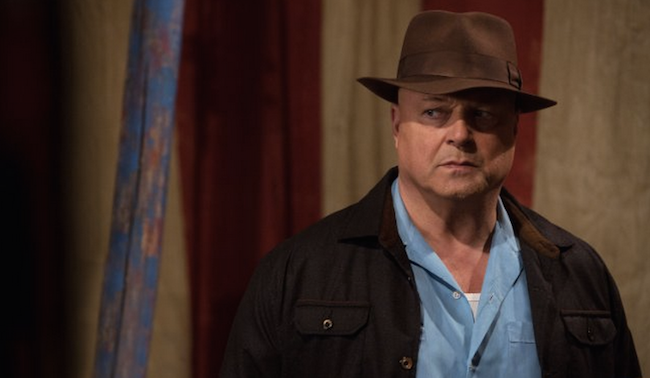 The eighth episode of American Horror Story: Freak Show opens with Gloria (Frances Conroy), telling her therapist about her concerns with Dandy (Finn Wittrock). She recalls tales of his early behavior, how he once tied up young Regina and cut off her hair, how he killed the family dog, and then eventually, how his only little friend went missing. She doesn’t want him committed, but the doctor insists that it’s time for him to see Dandy. Gloria denies that any “recent events” triggered her concern for the boy.

At the circus, Jimmy (Evan Peters) leads the freaks in a search for Ma Petite, until they find her clothes in the woods. They bring her clothing in a box to Elsa (Jessica Lange), who is distraught over Ma Petite’s death. But when Ethel (Kathy Bates) meets with Elsa in her tent that night, she accuses Elsa of being the killer. Elsa reacts strongly, asking how she could possibly accuse her of “killing innocence itself.”

Ethel begins to express a lot of recent concerns she’s had about Elsa, who is supposed to be her best friend. Whenever Ethel leaves Elsa’s tent, she feels uneasy and nervous. She tells Elsa how she heard Stanley bring up the idea of “mercy killing” the twins, and how Elsa barely batted an eye in response. Elsa defends her response, saying actions are different than words, adding that she will find the twins to prove her innocence, but Ethel has hidden them.

Elsa begins to leave the tent, when Ethel pulls out a gun and shoots Elsa through the leg, unknowing that her leg was fake. This prompts a flashback from Elsa where she explains the origin of her prosthetic legs. A prosthetics-maker who was making movie props in Germany, played by Danny Huston, took her own as his perfect project, making her legs. Ethel is ready to kill her nonetheless, adding that she’s going to kill all of the freaks afterward. “No one is innocent no more.”

Elsa proposes they have one last drink, but when she walks to her bar, she grabs a knife, spins around, and throws it directly into Ethel’s eye, killing her instantly. 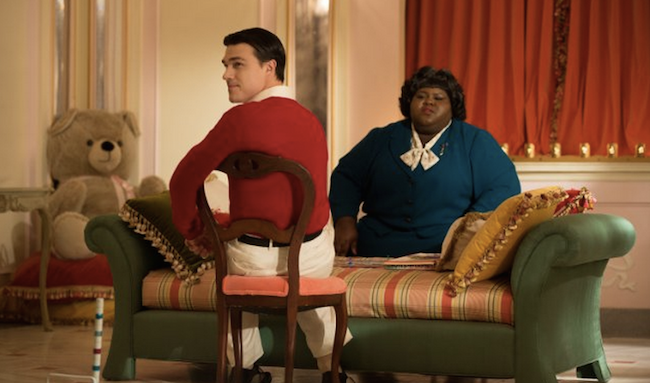 Later, Maggie (Emma Roberts) weeps and tells the other freaks how she was picking flowers, when a car crashed near her, containing Ethel who seems to have killed herself. They all head to the scene to find her words true. Ethel seems to have wrapped a chain around her neck and tied it to the tree, beheading herself when she charged into the tree.

In a flashback, we see Elsa reluctantly setting up the whole thing with Stanley (Denis O’Hare), who eases her mind with Oscar-talk. Elsa puts on a serious show about being absolutely crushed over her best friend’s death, and they all believe her.

Back at Gloria’s house, Regina (Gabourey Sidibe) has arrived to find her mother. Gloria claims that she is just on a long-term expedition to pick up some specific squash. Regina is willing to wait.

After a teary funeral for Ethel, Desiree (Angela Bassett) finds herself ranting about what it’s like to be a woman. Penny (Grace Gummer) brings up what happened to her, and all of the women decide to ban together to take out Penny’s father.

Dandy examines inkblots at the doctor’s, seeing men turned inside-out and murders. He was told that the doctor was testing his IQ, but he quickly sees through the lie. He taunts the doctor, asking him what he thinks about bathing in the blood of those whom you kill. Back at home, Regina threatens to call the police if her mother doesn’t appear soon. Dandy tells Gloria that he will continue to see the doctor – if Gloria will kill Regina.

Next, we see Elsa at some sort of resort or clinic in Miami, where she approaches a young, obese woman named Barbara, telling her she has a pretty face. Barbara shares her discontent with life, and Elsa offers her a world where every pound on her body will be celebrated. 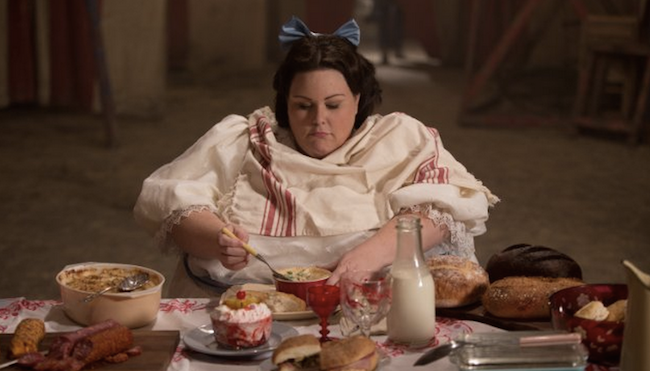 The women are working on their plan to get back at Penny’s father, even though Penny has some second thoughts. They are brewing some kind of nasty, bubbly tar, when they leave to break into his home, surrounding him and knocking him unconscious.

Back at the circus, it’s dinnertime and Jimmy is drunk. He is mad at Elsa for not even showing up to Ethel’s funeral, but Elsa explains that she was in Miami recruiting. She introduces him to Barbara, for whom she’s set up a feast. Elsa plants the idea that Jimmy and Barbara could be a couple.

Penny’s father wakes up to find himself mostly naked and tied to a chair in Desiree’s tent. Amazon Eve (Erika Ervin) is about to pour boiling tar all over him, when Penny jumps at the chance to do it herself. The cover him with tar and then feathers, but when they’re about to castrate himself, Maggie runs in, distracting them with a passionate argument. Penny decides not to kill her father but makes sure he knows that she is the sole reason he is now allowed to live.

Gloria speaks to the therapist on the phone, who thinks Dandy needs to be committed immediately, so Gloria terminates their relationship with doctor. Dandy reveals that he knows that his father was Gloria’s cousin, who molested little girls. Gloria knew the risks of breeding with such a man. Dandy threatens to kill himself, and when Gloria says that she could not go on without him, he shoots her dead instead.

Jimmy is still drunk the next day, and Maggie reminds him of their plans to leave the circus. Maggie tries to take away his alcohol, prompting Jimmy to tell her to “have her perfect life with someone else.” She leaves, and Jimmy turns to Barbara, leaning on her for a hug.

Dandy is shown disrobing and then lying in a bathtub of blood.