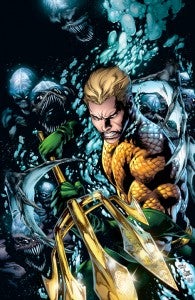 I challenge you to name two other DC characters that have had more of a pop culture presence for all the wrong reasons over the past few years than Aquaman. Aquaman hasn't always been looked at as a character in the lower tier of DC's list of heroes, and this latest incarnation of the ruler of Atlantis seeks to return him to first-rate status in the minds of readers and comic book enthusiasts alike. One of the easiest ways to get people to stop laughing at you is to go ahead and acknowledge the joke. Certainly, Aquaman #1 attempts to do that while simultaneously establishing the hero as a legitimate part of this newly imagined DC. Certainly DC was willing to put a lot behind this book, with Geoff Johns penning the stories and Ivan Reis on pencils, two large and well-known talents in the comic book industry, certainly. As a whole, the issue succeeds, largely because Johns invites the jokes and misconceptions about the character to become part of the conversation surrounding the character, rather than a whispered secret shame. Throwing in some scary and hungry looking sea creatures doesn't hurt either! Let me just say up front that Reis' artwork is quite stunning. He takes great pains to paint Aquaman in a very kingly, noble light. The poses, the stances, the glances he gives a group of men who are shooting at him when a bullet nicks him, all add to the power that both Reis and Johns are hoping to convey in this latest solo series. Aquaman has had so many solo series over the past few years that no one should be shocked that he's back again in this latest relaunch with his own title. Very few people in this first issue seem to take Aquaman very seriously. No one. Not even the thieves he encounters, who plan to just mow him down in their car, much to their chagrin when they wind up upside down. He quickly convinces them otherwise, leaving the police to gnash their teeth over the fact that Aquaman took out the creeps and not them. Truly topsy-turvy storytelling, but given this character's history, it makes sense. Everywhere he goes, he has to explain himself. Can he talk to fish? Does Atlantis exist? How does it feel to be unpopular? The issue offers an interesting and probably very realistic look at what it must be like to be a popular figure whom no one seems to respect. People feel free to say anything they want to you, because to them, you're not a "person". You're a movie star, a pop star, a politician, or, in the case of this series, a superhero. It's an effective an painfully awkward series of panels in which this happens. Through it all, Aquaman chooses to continue to live and keep going, and Earth looks like it will be home again in the near future. Rising along with him though appears to be a group of flesh-eating creatures, with large eyes and even larger teeth, who realize that "food is here" AKA humans, above the water's surface. Now that the elephants in the room have been addressed, the storytelling can begin, and I can't wait for issue number two. Grade: A+