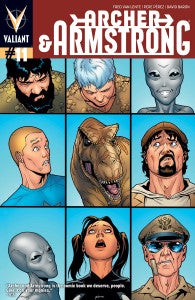 Last week's Archer & Armstrong #11 hit just in time for San Diego Comic Con International to start, meaning that we didn't have time to sit down and have our regular conversation with series writer Fred Van Lente about the book until just last night.

So apologies all around for this week's insights being a little late but there was a lot to cover in the issue and we didn't want to do it a disservice.

With Archer and Armstrong separated by a surprising event early in the issue, Aram is forced to deal with the unpredictable Mary-Maria while Obie spends some time with Redacted on board the Roswell UFO. 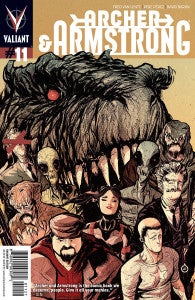 This is a spoiler-filled conversation, so if you haven't read the issue yet, go buy it and read it with us!

ComicBook.com: Any particular reason for the Brady Bunch homage cover? I mean, I dig it, but it doesn't have an immediate connection to the material that springs to my mind.

Fred Van Lente: Yeah, I didn't get that one myself. I initially suggested doing a Lost parody, given the book's subject matter, but I guess that can translated into "TV parody" somehow. It's a fun cover, though.

ComicBook.com: Okay, so something I meant to ask you before now: When Redacted talks, do the other characters hear the words that the letterer has redacted, or that does that sound like?

Van Lente: That's a good question. I don't envy the makers of Archer & Armstrong: The Motion Picture trying to figure that one out.

ComicBook.com: Occasionally, I imagine you really enjoying yourself at the keyboard when you can write a panel description like this page where the gang runs from a pack of stampeding dinosaurs, as a UFO rains laser-fire down upon them. Is that about right?

Van Lente: Oh, sure! Definitely. If you can't have fun writing about UFOs attacking dinosaurs, I'm not sure why you got into comics in the first place... 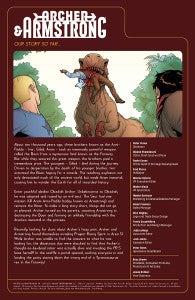 ComicBook.com: So when Papa refers to Mary-Maria as "Thelma," does that indicate that Mary-Maria isn't entirely in charge of her own body in there?

Van Lente: Well... She has two unwelcome passengers in the form of the lifeforces of her parents, Robert and Thelma, acquired from The Boon. They're definitely subconsciously influencing her, but Mary-Maria is largely in the driver's seat.

ComicBook.com: That's a great little piece of visual storytelling on page ten. In spite of the fact that you've had artist changes along the way, everybody you've had on the title so far has been able to carry off some of the clever nonverbal stuff you've thrown at them. Do you know going in who's going to be doing an arc and write to their strengths, or has that been good fortune so far?

Van Lente: Mostly good fortune. Honestly, except for nodding to some broad details -- Emanuela Lupacchino draws great women, for instance -- the story has to stay the story because events launched in #1 directly effect #7 and #11 and so on. The artists have to rise to the occasion, and I've been lucky mine do.

ComicBook.com: The "alien language" that's on the monitors: Does is it have a key? As in, could we read something pertinent on there if we were clever enough?

Van Lente: In the script, it just says "[unintelligible alien gibberish]". But I wouldn't put it past that wily Simon Bowland... 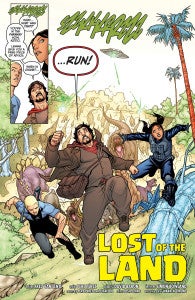 ComicBook.com: I'm glad somebody besides me is having a little fun with the strangeness of having this aggressive, anti-communist rhetoric suddenly resurgent on the right in this country. Do you think Redacted will fit right in if he eventually does make it out of the Far Faraway?

Van Lente: Are you kidding? Fox News would give him his own show! Of course, he's not much of a team player. He'd fit right in with his own channel on the Internet, a la Glenn Beck.

ComicBook.com: Obviously you don't take on a story arc like this unless you're a bit interested in things like the Roswell/Area 51 phenomenon. Do you have a pet theory as to what exactly went on back then? Or is it just kind of a detached interest/curiosity?

Van Lente: According to this terrific non-fiction book I read in prep for #10, the Roswell "UFOs" was a Soviet spy plane. Stalin was apparently obsessed with the hysteria over The War of the Worlds Orson Welles broadcast. So the dominant theory is that a) Stalin was actually trying to create some kind of alien panic or b) it was just a mundane spy plane that the US government suppressed to not cause Cold War panic. (Something the Soviets would not do when they captured one of our U2s decades later, but then in that instance they had a live pilot to trot around.)

ComicBook.com: With Roanoke playing a role in this story, I have to ask: Are there any other real-world mysteries we should be on the lookout for during the rest of this arc? Or would that be tipping your hand?

Van Lente: That would be tipping my hand. But if you are interested in the Lost Colony of Roanoke, this book, A Kingdom Strange by James Horn, should be right up your alley.

ComicBook.com: Our characters have run into a number of historical figures throughout the backstory of Armstrong's family...but Bierce is face-to-face with Archer in real time. Will he play a special role, or was it just another way of incorporating a little American mythology into the arc?

Van Lente: He has a very important role, as will be seen. And to complete this issue's reading list, why not check out his Devil's Dictionary?

ComicBook.com: Even accounting for time-travel, do you think Archer is in a place mentally where he can "guide" much of anyone? He's just barely out of the "brainwashed by psychotic parents" stage of his life...

Van Lente: At the moment? No. But what if his followers come from much further along in his development...?