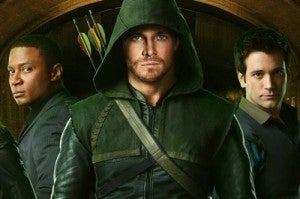 In two weeks, some fans will be lucky enough to be the first to see an extended preview of CW’s Arrow at San Diego Comic-Con International. In the meantime, the anticipated DC Comics adaptation that seemed to come out of nowhere,  has been picked up for a 13-episode first season and has already put out a few pieces of footage, including one recent trailer that really started to turn some heads.

What do we actually know about the series so far? Well, our friends at the Why I Love Comics podcast talked to writer and executive producer Marc Guggenheim in an episode that ran early today, and he confirmed a lot of the speculation that’s been surrounding the show and dangled one or two new pieces of information as well.

Guggenheim told Why I Love Comics that the influence of the miniseries had been huge--he called it a "proof of concept," showing that a storytelling device they wanted to use within the show could work, and he said that the more realistic approach to how he came to develop Green Arrow's "look" made a lot of sense to them and fit well with what they were trying to accomplish on Arrow. Oliver's bodyguard on the series, in fact, is named after Diggle.

The writer also tipped his hat a little bit to Mike Grell’s run on the title, which he called “seminal.” He suggested that, when the creators behind Arrow first decided that Star City was going to be renamed, they briefly entertained the idea of setting the series in Seattle, like Grell had, but that they opted for the creative opportunities that setting your story in a fictional city brings with it.

“This is a brand-new take,” Guggenheim said simply when asked whether the show had any connection to Smallville, the CW’s last big DC superhero project, in which Green Arrow was a major player.

He said that while the fan-favorite series was “an incredible vision of Superman and a lot of other DC characters, including Green Arrow,” the version fans will see in October necessarily comes from a different point of view and changes the tone to reflect that it’s Green Arrow, not Superman, who’s the heart of the show and those characters are after all very different people even if they usually are portrayed as living in a shared universe. 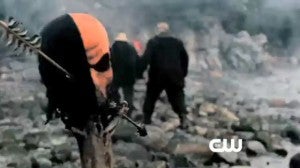 There is a DC Universe of some kind

"That is most definitely the mask,” Guggenheim told Eric Ratcliffe, the host of Why I Love Comics, when Ratcliffe asked him whether the image fans noticed in the last Arrow trailer was indeed the mask of Deathstroke the Terminator. That one minor connection is enough for this writer to declare the existence of a DC Universe.

Even if we never see anyone with super-powers in this more “grounded and gritty” take on the character, the idea that Green Arrow isn’t just Jason Bourne fighting faceless organizations and terrorists and corrupt cops but that he’ll be taking on a minimum of one major DC staple as a villain is an indicator to me that the character, and the show, exist in that universe.  The very fact that the showrunners chose to depict such a grounded villain as wearing a flamboyant mask as opposed to just being an incredibly talented hitman or something, to me, is a suggestive move.

Bear in mind also that Smallvilledidn’t rush to have other DC characters appear right out of the gate, but by the time it was off the air, it had been a veritable who’s who of DC heroes and villains, with everyone from the Justice Society to Blue Beetle and Booster Gold showing up, against all odds, in a live-action TV series.

Some key relationships will remain intact

Dinah Lance has already been cast. The indication seems to be that the romance between Ollie and Dinah will be present in the series, with Dinah being a key player in the show.  Guggenheim avoided addressing which of Ollie’s supporting cast would appear on Arrow, but didn’t quite steer clear of teasing that it’s unlikely Ollie will be existing in a vacuum.

Pressed as to whether  a 13-episode order and no guarantee of a second season might cut the odds of characters like Hal Jordan and Dinah Lance showing up right away, he responded that fans should "watch very carefully, and watch more than the pilot." Of course, the most likely scenario has various DC characters being referenced in dialogue or signage (Ferris Air, WayneTech, etc.), rather than actually appearing, but hey...!

There is a long-term plan

“I have plans for what episode 22 would be,” Guggenheim said of the show’s 13-episode order and the prospects of getting picked up for more beyond it. “And I have plans for what seasons two and three would be about, and with any luck, we’ll get to tell all of those stories.”

Arrow will debut on Wednesday, October 10 on the CW.