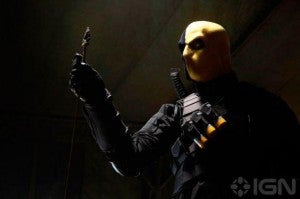 In a plot summary for the upcoming fifth episode of The CW's Arrow, the network has confirmed the first full appearance of Deathstroke the Terminator will happen on Halloween, albeit in flashback. You can check out a first look at Deathstroke in the episode at right and at the full description of the episode, titled "Damages," below.

"DC COMICS' VILLAIN DEATHSTROKE APPEARS ON THE ISLAND WITH OLIVER — After Detective Lance (Paul Blackthorne) arrests Oliver (Stephen Amell) for murder, Oliver tells Moira (Susanna Thompson) the only lawyer he'll allow to represent him is Laurel (Katie Cassidy). Laurel takes the case which puts her at odds with her father. Oliver offers to take a polygraph in front Detective Lance but things get tense when Lance asks him if anyone else was on the island with him. Oliver flashes back to when he got his first scar, courtesy of Deathstroke (guest star Jeffrey Robinson). Colin Donnell, David Ramsey and Willa Holland also star. Michael Shultz directed the episode written by Wendy Mericle & Ben Sokolowski"

Whose murder will Oliver be arrested for? Smart money is on either his father or Laurel's sister, if flashbacks to the island are a substantial part of the story. Could we find out that Deathstroke took somebody else out on that island and left the mess for Oliver? Arrow, which has seen strong reviews and ratings since debuting last week, airs Wednesdays at 8 p.m. on The CW. The series, an adaptation of DC Comics's Green Arrow, will feature a number of DC characters this season, including Deathstroke, The Huntress, Deadshot and a mysterious "well-dressed man" many fans are speculating could be Bruce Wayne--but we're expecting to be Maxwell Lord.