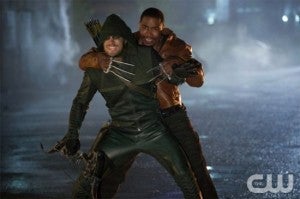 The CW have released tonight's after-credits preview of next week's episode of their hit superhero drama Arrow.

Titled "Identity," the episode sees Ollie face off against old nemesis China White and her new partner the Bronze Tiger.

You can check out the video embed, as well as the official description of the episode, below. "Identity" airs next Wednesday at 8 p.m. EST on The CW.

Arrow 2x02 'Identity' - Thieves hijack medical supplies sent to Glades Memorial. Oliver gets into a heated battle with China White and her new partner, the Bronze Tiger, over the supplies. Meanwhile, Laurel makes plans to catch the Arrow; and Thea give Roy an ultimatum. Original Air Date: Oct 16, 2013 on the CW.