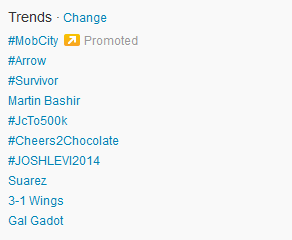 Ever since Warner Bros. announced early today that they had cast Fast & Furious bombshell Gal Gadot as Wonder Woman in the forthcoming Man of Steel sequel, tentatively titled Batman vs. Superman, she's been trending on Twitter.

The casting has been the subject of hot debate today, with many fans voicing their discontent, others praising the decision and then the inevitable clashes as those two groups tried to shout each other down.

But with rumors flying that Barry Allen--better known as The Flash--will appear in Batman vs. Superman, that character's first appearance on The CW's Arrow tonight generated a lot of its own online discussion and in the time just after Arrow aired tonight, Arrow was actually one of the top trends on Twitter, forcing the Wonder Woman-to-be down the list.

Not a bad day for whoever's in charge of DC Comics's social media presence...!