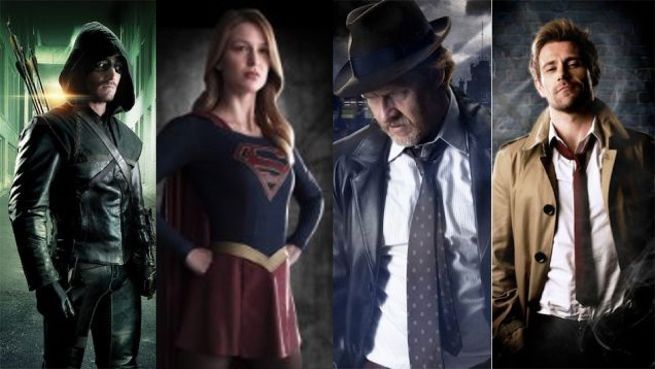 During an appearance at Wizard World Philadelphia Comic Con, Stephen Amell was asked if he and Grant Gustin might be put into the upcoming Justice League movies.

Amell replied, "As of right now, the movie universe and the television universe are very, very separate. I mean we've seen Ezra Miller, who's going to play The Flash in one of the upcoming films, and even on the Suicide Squad, we have a whole slew of characters that are now representing the Suicide Squad. And the Suicide Squad is at least for the foreseeable future is not going to be featured on Arrow. So we're keeping those universes separate."

Of course, Amell's answer came as no surprise, because it was pretty clear that different actors were being cast in the same roles for the DC movie and TV universes. However, Amell then went on to say something very interesting, as he revealed that crossovers were possible for any of the DC television shows, even ones on different networks.

"On the B side, there is an opportunity for interconnectivity with any DC television show that exists," explained Amell. "Like, as an example, yesterday Constantine was cancelled. And there is…yeah, I know, it's brutal…it's a good show, and it should come back. And it may come back, like there are various platforms where it could come back."

Amell continued, "Now, Constantine was an NBC show. I'm on The CW. I had had discussions with DC… so not NBC, not CW… but with DC Entertainment about guest starring on Constantine when it was still on the air. And that was and is still on the table. So we have Flash, we have Legends of Tomorrow, a new show which is directly connected to the Arrow universe, we have Supergirl… she got picked up, directed by my good friend Glen Winter, that pilot, I can't wait to see it, I'm sure it's going to be amazing… there's Gotham obviously, and I'm missing something… Titans, there you go. So again I wouldn't worry too much about the movie universe, because we have no shortage of options for me and other characters to populate."

But what would have led Arrow to appear on Constantine? Amell explained, "The reason that I was going to guest star on Constantine, at least the idea that we were throwing around was he's an expert when it comes to the Lazarus Pit, which is now something that is a part of and will continue to be a part of Arrow."

Amell also went on to voice his support for Constantine returning on another network.

"I think that all the support that it got, Geoff Johns at DC was supporting it, Jim Lee was supporting it, I think Grant [Gustin] was throwing a little weight behind it, as he should, because that dude is a heavy weight in the DC television universe," said Amell. "I don't know how it would play. I just think that it deserves an opportunity. I really do."