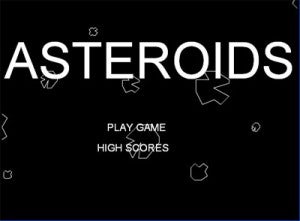 There have been some interesting adaptations of comic books and video games over the years, but it could be argued that one of the strangest comes in the form of today's announcement that Universal Studios will be developing a big screen adaptation of one of Atari's classic video games, Asteroids. Yes, you read that correctly, Asteroids. In what might be considered stranger news, Universal actually outbid three other movie studios for the rights to develop the project, which will be produced by Lorenzo di Bonaventura, who is also behind the upcoming live action adaptation G. I. Joe: The Rise of Cobra. The project has unlimited narrative potential, as the original video game is not based on a story, legends or tales of princess rescuing. It should be noted that Universal is also in the middle of developing adaptations of classic board games such as Candy Land. These film projects can certainly be described as a roll of the dice for a major film studio!

Asteroids: The Movie? Believe it or Not