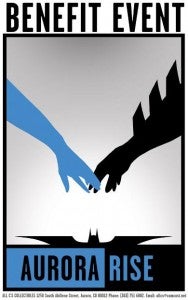 All C's Collectibles--the comic book store in Aurora, Colorado, not far from the site of the mass killings at a screening of The Dark Knight Rises--have launched a Facebook page for their upcoming "Aurora Rise" fundraising event. "The mission of Aurora Rise is simple," says the site. "We are going to do everything in our power to assist and aid the victims and victim’s families."

A silent auction and fundraiser is tentatively scheduled for late August, with the comic book store owner taking the reins of organizing an event.

At the Facebook page, set up on July 25, the comic book retailer has links for charities accepting donations on behalf of the theater shooting victims, including a song composed by The Dark Knight Rises' Hans Zimmer (who scored the three Christopher Nolan Batman films and will score the upcoming Man of Steel), titled "Aurora." Supporters can download that song for as little as ten cents in a name-your-price style purchase system with the proceeds going to benefit the victims of the shooting.

Publishers like Dark Horse Comics and Image Comics have pledged donations to the event, and 30 Days of Night creators Steve Niles and Tony Daniel will appear at the store in August, according to Comic Book Resources' Robot 6 blog.

“It’s very important to note that All C’s is the only comic book store in the city,” Dark Horse’s Aub Driver told Nerd Bastards. “This tragedy has rocked their community at large, as well as the rest of the nation. Some of their customers were present at the theater when tragedy struck, even one of their own employees. Showing your full support for the comic book shop and the comic arts medium is incredibly crucial during this dark time.”

He added, “This is about community. This is about bringing the community of both Aurora and Comics together. This is about standing as one in the face of evil and knowing that one common factor, our love for comics, can unite us.”