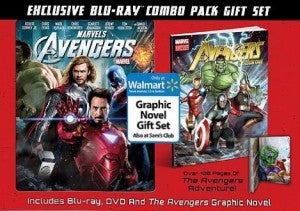 In the past, Wal-Mart has had a pretty good relationship with Marvel Comics; they've attached comic book reprints and digital download codes onto movies like Spider-Man 3, X-Men: First Class and even the special "preview scene" of The Amazing Spider-Man they sold earlier this summer. So it's probably no surprise that they'll be packaging a graphic novel with the forthcoming Marvel's The Avengers Blu-ray.

What's more surprising is that the graphic novel in question is The Avengers: Season One, a notable absence when Marvel announced the first and then the second wave of "Season One" original graphic novels, in which some of Marvel's top-tier talent took on reimagining the origin stories of popular characters. The graphic novels, which seem designed for the bookstore market and the casual fans, have nevertheless done pretty well among the comics direct market, and each one (so far) has included a code inside for a free digital download of the book.

Now it appears as though Wal-Mart has a stranglehold on Avengers: Season One, and will be selling it as part of an exclusive package with the Blu-ray at its Wal-Mart stores in the U.S. and Asda stores in Europe, according to Bleeding Cool, who found the following description for the graphic novel on the Asda site:

"The all-new and exclusive graphic novel, modernising the formative first days of these super-hero icons that defined pop culture. A hidden foe manipulates the fledging Avengers from the shadows, meticulously sowing the seeds of discord and mistrust but only the smartest among them will see through the deception, and it’s not who you think!"

No creative team or page count attached, and although it certainly seems unlikely that it will be a full-sized book by A-list creators if they're going to include it free with purchase of the movie (previously it's been single issue comics  that were included in such packages, at a total retail value of around $3), the ad promises "over 100 pages" if you look closely.