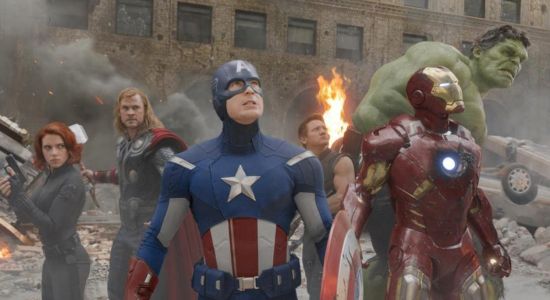 First, people were predicting upwards of $125 million for The Avengers opening weekend box office. Now, people are predicting upwards of $150 million for The Avengers opening weekend box office. We want to be first out there to predict that The Avengers movie will rake in an incredible $175 million in it's opening weekend at the U.S. box office. While that might seem like an astonishingly high number, keep in mind that movie ticket prices have grown to be astonishingly high. In March, The Hunger Games shocked the world with a $152.5 million opening weekend, and The Hunger Games didn't even have a 3-D version to drive up its ticket prices. According to Box Office Mojo, the record opening weekend of $169 million is held by Harry Potter and the Deathly Hallows Part 2. The Dark Knight is second on the list with $158.4 million, and the previously mentioned The Hunger Games is #3. We predict The Avengers will shoot past all three of them, and here is why. While 3-D might not be the box office draw it was a couple years ago, all the non 3-D screenings of The Avengers will likely sell completely out. Many people's only option will be the 3-D version if they want to see the picture opening weekend, which will help drive up ticket prices. The Avengers has pulled off the very rare feat of appealing to virtually every demographic. The Avengers has one of the most popular casts assembled in recent movie history. While most superhero movies tend to cater to mostly a male demographic, the outstanding cast of The Avengers and the inclusion of humor is giving it quite a bit of appeal to the female demographic. The Avengers even has the potential to appeal to the family moviegoers. While The Avengers is rated PG-13 and has plenty of violence, it also seems just safe enough for families to bring their kids. The Hunger Games, The Dark Knight, and even Harry Potter and the Deathly Hallows Part 2 to a degree had the buzz of being dark and scary. And while not to take away from the intense action of The Avengers, it does seem to have a more light-hearted buzz. The Avengers is one of those rare movies that virtually everyone will want to go see. Also, early screenings of The Avengers have been drawing overwhelmingly positive reviews. It's rare for an action blockbuster to appeal to both fans and critics. Just think of how much money the Transformers movie raked in, despite a lot of negativity from critics. With even the critics behind The Avengers, the sky is the limit. We might be tempted to predict $200 million, but we don't know if the theaters will be able to fit in enough screenings to reach that total.

Community Fans Are Freaking Out Over Movie Announcement